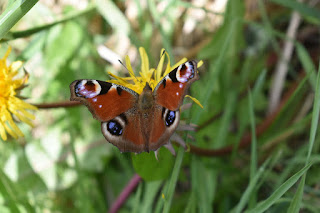 I feel I talk about the weather a lot, but when your furbaby insists on an average of two hours a day walking, your life starts to revolve about it. This last week has been constant niceties to the other dog parents - "Spring is definitely here now!", "Isn't this sunshine wonderful?", "Rumour says more snow" and my personal favourite; "I honestly don't care if its warm or cold, at least its dry!"
That sums up the weekends weather, dark cloudy mornings and then glorious sunshine with a chilly wind. Once in shelter, its glorious, but its certainly that time of year where you fear not bringing your coat then end up taking it off and putting it back on at least five times a walk! With that in mind, and the fact that the summer opening hours on all the historic Scotland sites has kicked in, meant it was a perfect weekend for a family outing to a castle. 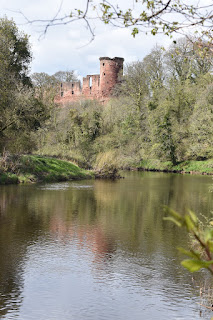 Between my niece volunteering last summer at Linlithgow Palace, my constant inviting people along to the castles with us and last years jousting, pretty much everyone in the family now has a pass with Historic Scotland, so its a good cheap day out that lets everyone get some fresh air and much needed vitamin D. We have done Bothwell before, so I will spare you all the history, but it was the first time my brother, my sister and her two kids had seen it, so was well worth the revisit. Sadly the Beast from the East has damaged some of the foundations, so we were unable to get into the dungeon, but there's still plenty to see and wander about in. 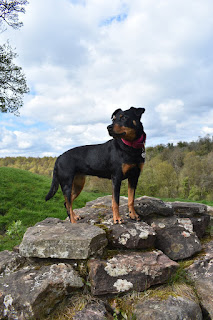 This time we added the riverside walk to the day. It was my brother who had spotted it when looking up the castle, and it was a splendid way to burn off our picnic we had on the castle grounds. The path was just sheltered enough that it felt warm and pretty soon the kids were climbing in trees and insisting I get their photos. They love that my camera bluetooths to my phone so that they can see a big version of the picture instantly rather than crowding around a tiny screen.


Missy's little cousin Ben had come along for the day too and, though he isn't trusted off the leash (he will chase anything - cars, bikes, joggers etc) he did very well and kept up with us all. He dislikes bridges, and wooden stairs you can see through which, as I'm used to Missy who has absolutely no fear, was very odd although I did feel sorry for him crawling nervously about, so insisted people carry him (I would have, but I have a strict one dog per person rule when in groups and was in charge of Missy). 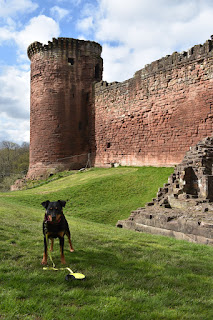 And that was our little day out. My brother has definitely got the castle bug, so expect to see plenty more! The hubby and I are also thinking about our annual "staycation", and are tempted either doing the Isles or going up Elgin way to get a bunch of sites ticked off the list. I'll let you know what we decide on when I know!