Advent is upon us

Well, that may sound a touch more gloomy than it meant to...


The Christmas songs have started, lights are appearing in the gardens around the estate and I've bought the advent calendars for us all (I'm so happy that Wainwright do biscuit ones, Missy isn't allowed dairy so its always a bit of a struggle to get one for her!). I've also been ploughing on with my Christmas crafts.

I would show off a lot more of the bits I've made, but just as my sis (and knitter extraordinaire) has been lamenting, it would spoil the surprise for a lot of people! So here is one of the peices I can show off:
For my eldest neice - she wanted a dress that was both sparkly and purple. I promise that here is much more sparkle in real life, the camera really doesn't do it justice! As she is at the awkward cusp-of-tweenhood age, I really tried to make something that would appeal just as much to a young teen as it does to her sparkle-obsessed current self. (I kid you not, I've seen the sassy eye rolls and pouts and sighs, any day now and those hormones are gonna hit her hard, and anyone else in a subsequent 20 mile radius!)

My other big craft project is for Missy and some of the doggy relatives in the family. She had a giant of a vizla for a daft old uncle (I stress the daft in that comment) and a little tiny King Charles for a cousin and the plan is to make bathrobes for them all. I made one for Missy a while back, and I can safely say it is the most useful thing I have ever made - she's one of those dogs that stays damp for hours no matter how much you towel her. Now I just wipe the mud off, pop the bathrobe on and let her sleep on her pillow by the radiator and no harm done to anyone! 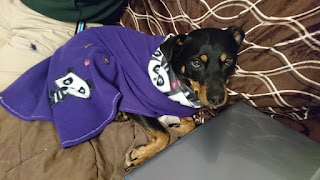 I've even modified it into a little fleecy pyjama set for her! The nights are getting very cold (its set to hit -5C this week) so she needs a little something to help stay warm at the moment.

Well, hopefully I'll fit in a nice interesting walk or two and post again soon!
Posted by Rachel at 12:55 1 comment: 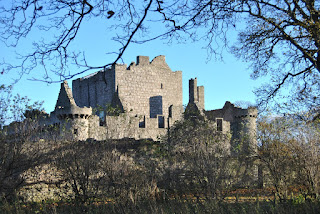 This is actually a take-two for this castle. Last time I tried to go to this one, it was shut for renovations! But nonetheless, Craigmillar Castle is finally off the hit list!

Deemed a 'romantic ruin', this castle is regarded as one of the best preserved castles in Scotland. Tucked away behind a hospital and a housing estate, it literally pops up out of nowhere when your trying to find it.

A 10k was underway in the large field/forest area beside the castle, so we decided to just go straight in and do a proper walk afterwards. The hubby picked up the kids quiz and we were off. As it was one of those very cold still days, there was only a handful of other people in the castle, and for the most part we had it to ourselves. Missy has become a master of the spiral staircase and, with it being so quiet, we simply let her off the lead to come up and down (one of us went ahead first, so she was never left unattended). 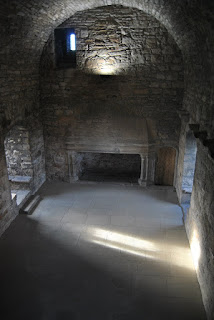 The big historical draw for this castle is that Mary Queen of Scots visited here, and this was where the "Craigmillar Bond" (a pact made by her close followers to murder her husband, Lord Darnley) was written up and signed - with or without her knowledge, no one knows for sure. The coop was successful, although it proved to be the start of the slippery slope that led to her execution.

Once we were done in the castle, we took Missy for a walk along the grounds. The race was still going (the men where now running, the ladies who we originally saw having finished) and we did our best to keep out the way. I cant say the same for Missy - whilst she wont chase runners, she seems to delight in taking up as much of the path as possible and wagging her tail at them! 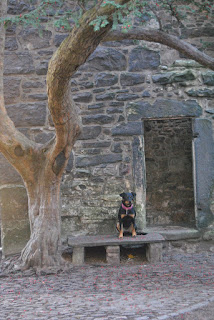 After that the day was pretty much done - I must confess that I am terribly looking forward to spring and the days getting longer again!

In other news, the first batch of baby plecos have been rehomed and I'm now growing the next batch on a little more. As I suspected, the adult plecos in the main tank have decided not to use the lovely pots I've given them and proving more difficult than ever to spot! My Christmas sewing list is slowly being worked through - hopefully I can get some photos up soon of the non-spoilers!

Well, the nights are drawing in and the days are starting late, autumn seems to be swiftly passing into winter - complete with a snow warning in place over the next two days (which hopefully will come to nothing).

We decided that we wanted to fit in a few 'bumper' walks for Missy as (thankfully) she dislikes miserable weather just as much as I do. I had been looking about on the Scottish Heritage website and spotted the Antonine wall. Its the less famous cousin to Hadrian's, and is perhaps less a wall and more a very deep trench and turf mound.

Despite the low impact visual of the area, there was plenty of information about the fort stationed there and its history. We were at the Falkirk side of the wall (at 37 miles, there was never any thought of trying to walk it all) where the Rough Castle Fort used to be. Interestingly, it was manned by the Nervii, a Belgic tribe who were conquered by the Romans and held in high regard - we had a good giggle at the Asterix cartoon that Historic Scotland used for describing them! 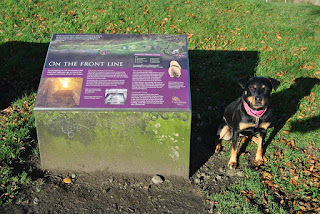 As an aside, to access this part of the wall, you park at the Falkirk Wheel and then walk over to it. I plan on revisiting the wheel in the warmer weather (after 3 hours wandering all around the Fort and the wall, even Missy was ready to call it a day), so will do a more in depth post later, but it certainly looks like a good day out for the whole family! Perhaps an Easter doggy play date...