Just a short post today - its all been a bit manic this end, summer brings out weddings and gala days and I always somehow end up helping out with all of them!

Firstly (because I'm so eager to show it off!): 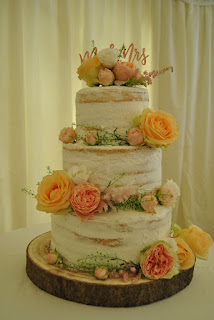 Wedding cake! My old high-school bestie got married at the weekend and asked if I would do the cake as a wedding gift. I'll confess that I got really stressed out about it as it all became rather last minute but I got there in the end so super happy!

My other big time consuming task was gala day dresses for my niece and her fellow Bauer girl. They started off like this: 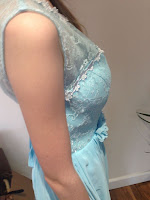 I'm not sure who I blame most - my 12 year old niece and classmate for deciding that they were too old for kids clothes, or their parents who let them buy the dresses. Either way, as you can see my pre-pubescent niece suddenly (to her absolute horror) had a dress giving her gigantic boobs (and they really were gigantic on her). As usual, the buy was last minute so they had no other option other than to ask me if I could do something to fix it and make the girls presentable to the public. 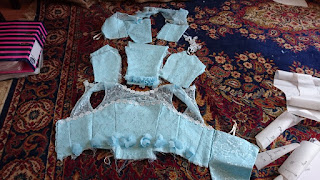 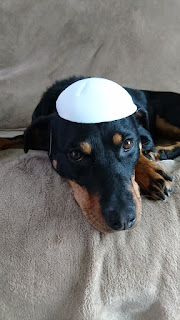 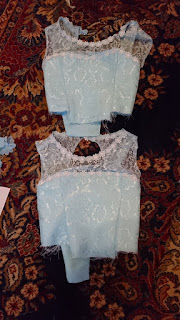 Anyway, the 12+ hours effort paid off: 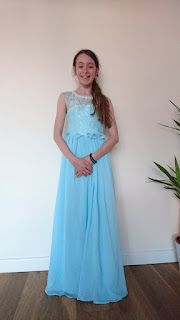 I was at the above mentioned wedding, so missed the gala day, but I was reliably informed that the dresses held up well and that both girls were very happy with them!

Well, we're all just back from a long dog walking holiday (I say just, we got back Friday, it's just taken me this long to find the time to sit down and recap the weeks adventures!).

Typically, we go to the Lakes each year, but this time we decided to check out our own home turf a bit more and do a staycation in Scotland, namely the Trossachs area. A quick internet search had showed us that, whist lacking in dog friendly museums like Keswick, there were a few dog friendly gems on offer to check out.

Monday we stopped in Stirling for the day and basically walked the entire old town. Missy enjoyed hunting for ghosts in the beautiful graveyard by the castle and we found the Kings Knot, an odd little gem of a dog walk. The castle doesn't allow dogs, but we still managed a look around the grounds and got the first ice cream of the holiday there. Despite her best efforts, Missy got no ice cream although I did share the end of the cone with her!
We finished our drive up and through Killin, where we were based for the duration of the holiday. It's one of these lovely little villages were sadly everything closes at 4 - we managed to pop into the post office and get some leaflets for the local area and the owner of the place fell into the trap of Missy's flirtatious stare and gave her several of the free-to-try anchovies. She certainly seemed to enjoy them, although my suspicions that the dog thinks she's a cat have begun to creep in again!
The village was short on take out options but the Cowry was recommended to us and, discovering the pub part was dog friendly where we could shelter from the elements, we were not disappointed. 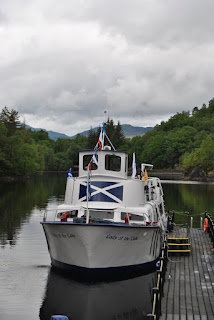 Tuesday was Loch Katrine. It was the only day of the holiday that really rained, and fortunately the hardest squall hit whilst we were safely inside the boat enjoying our island tour of the Loch. The steps leading to the top were far too steep to even think of taking Missy up, so we were enjoying a cup of hot tea as the rain struck and all the other passengers gave up and joined us. Whilst the hubby and I found it very interesting, I don't think Missy thought much of it seeing as she slept for the majority of the ride!
We then went on a four mile round trip to the Loch view point and back before heading back to Killin for a late lunch in the Capercaillie pub. My in-laws have stayed in Killin many times and, for the afternoon walk, we decided to follow the directions to the crannog that was supposedly in the area. I felt we did well following them, and we certainly all enjoyed the hours walk around Loch Tay, but we could not find that crannog for the life of us! We managed to find a patch of signal and called my FIL who informed us that the island I had previously admired was it, and did he mention to me about a castle in the area...
We gave up on the crannog and rescheduled it for another day. The weather had turned close and we were all being eaten alive by midges so decided on getting an early night for the next adventure. 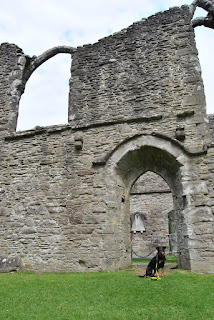 Inchmahome Priory was the highlight of the week for me on the Wednesday. It's a Historic Scotland site where you have to take a boat out to a tiny island where a beautiful old ruin is located. Missy was a darling and shyly said hello to anyone who would pat her on the boat and then she made friends with a little toddler who, every time we passed them by, would shout "Doggie!" and demand his father take him over to see her again. It was a glorious day and we all enjoyed a picnic looking out onto the lake, although we were somewhat scuppered for a good stroll when we realised that the island was only half a kilometre across!
We stopped in Callander on the way back and took a quiet evening to ourselves. Missy spent the evening snoring on the sofa alongside hubby.

Thursday was a last minute call. We had originally planned a day trip to Oban, but deemed it too far in the end. Inveraray Jail has long been on our to do list and, at an hour away, was a realistic option. We'd seen flyer for it before and the tagline of 'Fun for all the family - even the dog!' had sold it to us before we'd even looked into it properly.
An 18th century jail, it was a fun insight into the justice system of Scotland. Despite the somewhat grim subject matter at times, it was explained very well and the audio tour was both informative and interesting but not dry at all.
We finished the evening giving the crannog a second go (we did find it!) and also found the castle ruins before we had our last evening meal in the Cowry pub. Missy fell asleep in front of the fire where she chased rabbits in her dreams.

We had had grand plans for the trip back of stopping in Perth, but decided to just stop at Huntingtower Castle instead. Another Historic Scotland site, this one allowed dogs on the grounds but not within the castle itself. The hubby and I took turns going in and out of the castle whilst we filled in the quiz and then enjoyed our lunch in the sun on the grounds.
And then we were home and Missy insisted on peeing on every fence and lamp post as we trudged around her usual stomping ground - I like to joke to people that she's checking her face book feed!