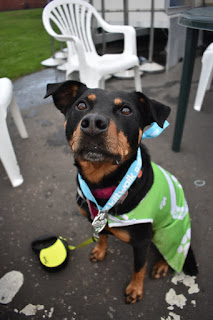 So, we did it again! Yesterday we walked 24 miles around Edinburgh with the Kiltwalk raising money for the Edinburgh Cat and Dog Home - giving dogs (and cats!) like Missy a second chance to find their forever homes.
But first, the 24 miles! 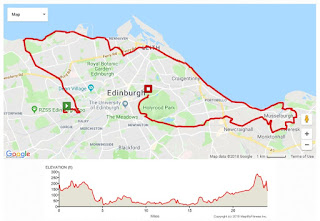 They had shaken things up this year and the route was reverse to last year, and two miles shorter, starting at Holyrood and finishing at Murrayfield.
The only complaint I had for the entire day was related to that: not the two miles, goodness no, the different start and stop points. We parked at Murrayfield and, whilst coaches were being provided to take people to Holyrood, no dogs were allowed on the coaches. I had realised that in advance, and so had to organise a taxi to pick us up and drop us off (big shout to Central Taxis for being dog friendly!). Whilst we could have got a tram, that would have meant adding a significant amount of walking to an already busy day. But as far as complaints go, it wasn't a big deal - the cab cost the same as the shuttle bus would have and we got there nice and easy, it just seemed an odd thing to do for a dog friendly event. 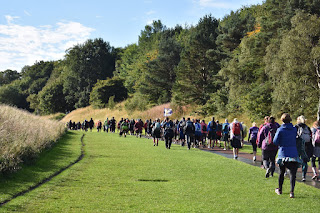 It was overall a better event than last year. Despite not training (again! I swear, next year if we decide to give this another go we will do some training) we kept up with the main bulk of the crowd, which really added to the atmosphere of the day. We bumped into lots of other dogs and discussed the different charities people were walking for. Some were well known large charities and some were smaller charities that we hadn't heard of - everyone agreed though that it was nice to have an event you could choose a charity for as it allowed a lot of the smaller ones to be seen.

The weather wasn't as kind as last year with a chill breeze and some showers, but we marched through it and, when the wind dropped and the sun came out, we were treated to a pleasant few miles to dry up and enjoy the view. As always, Missy was keen to make friends both on the walk and off it. We allowed her off the lead when it was safe to do so and she was off saying hello to other walkers and finding dogs to play with. I'd made her a little vest out of an EDCH t-shirt and it certainly made her stand out and be seen, although it turned out a little long, so I will need to trim it before the next event we do! 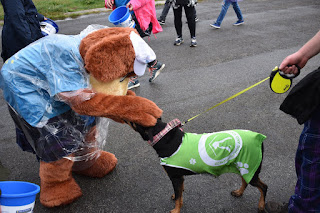 Meals were very similar to last year (soup for lunch, mac and cheese and a burger for dinner) but there was a lot more choice for snacks during the 24 miles. Some of the pit stops had dog biscuits too, which Missy appreciated, and there were plenty of dog bowls about offering water. With the help of Missys spectacular "cape", we were spotted by some of the EDCH volunteering team and got our photos taken for the website and Missy was much admired before we all set off again.We realised we had found pace setters fairly quickly in the walk - a group of bees always seemed to be a few people in front of us and a few dogs were generally always just behind us, and that really helped keep up going along. 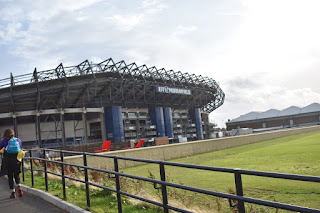 As we reached the Blackhall pit stop, we realised we had a good chance of finishing the walk in 8 hours, taking more than an hour off of last years time. So, despite the hills (what an audacity of the local goegraphy, saving all the hills to the end!) we powered on through and made the last mile in 12 minutes. So, 24 miles in 7 hours, 57 minutes - got to admit, very pleased with that!

As expected, the hubby and I are a bit stiff and sore today, but all things considered we're doing very well. My arthritis was very manageable and today, barring one small blister, my feet are pretty ok. Missy spent her morning walk chasing squirrels, so obviously the paw balm and paw massage last night were all she needed!

We're talking about maybe doing the Aberdeen walk next year, for something different, so watch this space!
Posted by Rachel at 03:05 2 comments:

Paws by the Prom

So last weekend I finally succeeded in getting to a dog show that wasn't officially cancelled due to heat, or canned owing to rain - and it was at a re homing centre close to our hearts: The Edinburgh Dog and Cat Home!
Fate has previously got in the way of me attending the Paws by the Prom event but I finally got Missy along. The weather was perfect, a light breeze to keep the dogs cool and the bugs away, but sunny and warm enough that we could stand and watch the displays without being uncomfortable. Sadly all my family were busy, including the hubby who was working, so it was just myself and my mum who managed to get along, and I was super disappointed that they all missed it. 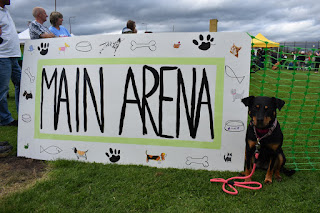 We arrived just as it opened up and, after registering a photo of my mums cat (Elvis) into the cat photo contests (a lovely touch in my opinion) we made our way to the paddock and registered Missy for prettiest girl and best rescue. After a quick bite to eat, we watched the dogs compete and fail at the temptation alley, much to the embarrassment of all the owners and to the delight of the dogs. Then we watched the handsome boys before it was time for prettiest girl. My "no one knows or can agree" as Missys breed got a good laugh and despite her best efforts at flirting, she didn't rank. With all proceeds going to the EDCH, I really didn't care and we then mooched about the stalls (Missy somehow managed to gain a biscuit at every table!), had a chat with the guys from the fire brigade (and I got a snow cone the size of my face) before watching the agility demonstrations.


Missy is too clever to do agility. Whilst she is reward driven with treats, she will expend the least amount of energy possible, and go the simplest route rather than waste good squirrel chasing energy to preform pointless tasks. She is very capable of hurdles and the slalom, if muggins here is running as fast as possible with a treat held put before me! 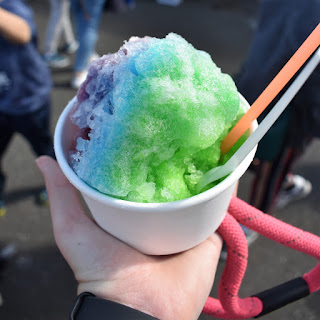 My favourite show round was one I didn't participate in - most like owner. I never bother with it. Missy is small and stocky with black hair. I'm a skinny brunette and my husband a six foot ginger, so it's just pointless. Most of the time it just feels stupid and awkward to watch, but this time, a lady fully embracing her natural curly white hair strode out carrying her westie dog who was equally bedecked in curly white hair and they both had sunglasses on. It was absolutely perfect and the audience as a whole laughed at the performance. She placed first, rightfully so! 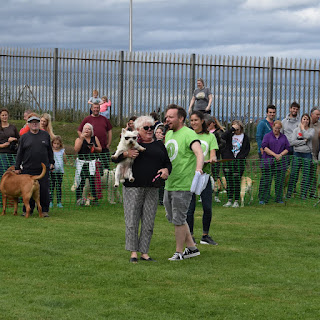 After that it was best rescue (again we didn't place, but by this point the dj doing the competition was so overwhelmed and in love with every dog before him he couldn't judge and was basically getting the audience to choose!) and then we checked to see if Elvis had placed in handsomest boy (again no luck!) before going for a stroll along the promenade and beach. A very successful show, and one I'll attend next year with any luck! 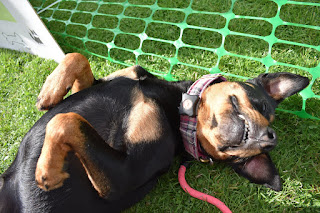 To bring things up to date and round off this week, things have been very busy and crafty in the household. The hubby has recruited my sewing and painting skills to hand build some magic tricks, and I'm now starting an absolutely fabulous wizards hat to go with his amazing wizards coat.
Although, first of all I finished the set for my sister and her family - a waistcoat for my brother in law. He's an odd size in garments, so I had to drape a pattern on him. It's my first shot trying to "tissue fit" an item, so fingers crossed it's a good fit! 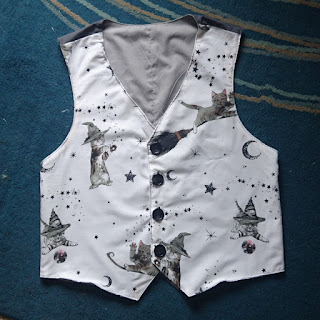 And I couldn't spend all my time indoors crafting, so today I took Missy, my mum and my eldest neice and nephew to Crichton Castle. I've done it before with Missy, and we timed it well between rain showers. The kids enjoyed it too once we eventually got going, I despair at the new generation being so unable to cope without phones. There was no signal. And? We're all here. No one is going anywhere. Just enjoy the view without looking at it through a digital display!
Although my mother was cruel and insisted on a brisk stroll through the meadow, I think she takes delight in that at almost sixty, she can easily outpace and hold better stamina than a thirteen and nine year old! Missy enjoyed it, though no one can keep up with her pace as she chased the ghosts of scents. 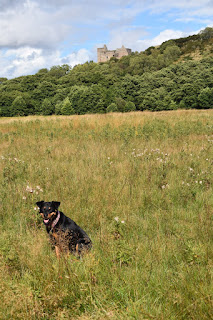 Got special plans next weekend, tune in Monday to read about it!
Posted by Rachel at 12:17 1 comment: