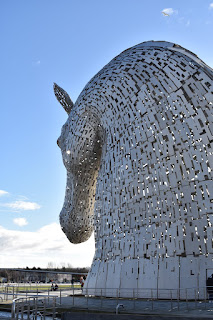 An odd little weekend. I had my dad doing a tour de force visit - he sailed over night from Northern Ireland to Liverpool, drove to Manchester to see my sister then up to Edinburgh to crash at mine and then saw my other sister today before going through to Glasgow to see his brother for the night and sailing home Monday.

Knowing my dad was due to turn up in the evening, the hubby and I spent yesterday getting jobs done about the house before taking Missy on a super soggy walk about Beecraigs. It was far too wet to risk taking the camera along and, despite water proofs we were all fairly soaked through.
They have spent the winter season upgrading the paths and all the signs as well as putting in new walks, so we were pleased to try a new route and get a renewed interest in the place. 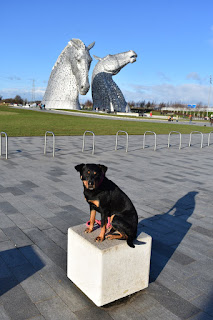 Today we did the Kelpies. You are guaranteed great pictures there no matter the weather, and the bright blue winter sky really gave them a cold steel grey colour that matched the bitter wind. My fathers arthritis is getting pretty severe, so an amble about them followed by a break in the coffee shop before another amble was all he was really capable of - but it was plenty enough time to enjoy the attraction, meet fleets of other dogs and show my neice and nephew how foreshortening works. Everyone was soon getting photos 'feeding' the horses and then played about pretending to have a miniature sibling in their hands!

Just a short post today! Its funny how tiring these short visits can be!
Posted by Rachel at 13:40 1 comment:

Well, the ravens really refers to Ravenscraig Woods! Saturday the hubby and I had a rare day off together without any family commitments and, after a wee search online, came up an ideal way to have a quiet but doggy orientated day. 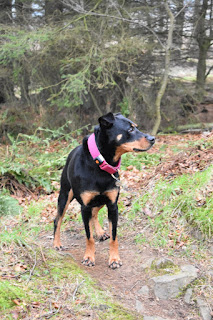 Firstly we decided to investigate Ravenscraig. Now, we'd passed signs for this wood when on route to Cairnpapple and were surprised to discover that it's also owned by the same trust that looks after Beecraigs country park. Unlike it's much larger more well known cousin, Ravenscraig is a small woodland that's been left to fend for itself. The signs indicated that the "long" 2.4km walk would take an hour and in the end we were about that long as all the arrows had worn away, so we kept taking the wrong path and ending up in dead ends! 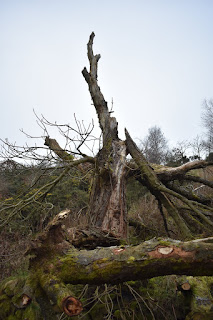 Still, won't complain as it was a nice walk away from roads or livestock where Missy could get off the lead and hunt for mice. Craig, in the place names referred to here, comes from the Gaelic Craeg, meaning rock, and the walk was certainly very rocky as we would round a small hill that afforded a lovely view above the days fog. 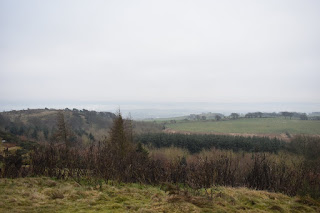 Afterwards, we decided to check out the opening of the Paw Stop - a brand new dog friendly cafe located not sure far away in Bathgate. It wasn't fully functioning yet, and was more an open day in the way of "hi! We exist! Come say hello and have some free cake!"
Missy was much fawned over and was eager to tuck into her party bag. The place was crammed with dogs so I didn't manage any photos, but it looks like it's gonna be a nice wee set up. Hopefully in a few weeks I'll pop by and try the menu.

In the evening we had Foam Dart Thunder event at icombat Glasgow - basically, we got to go and play nerf games with a load of equally enthusiastic nerds in a laser tag arena.
And it was awesome. Again, no photos as I didn't want to risk breaking my camera or phone, but it was a great evening. Despite the mohawks and military get-up, all the people there were really friendly and helpful and had loads of time for us newbies. We did a version of tag, we played a few rounds were we had to get a 'bomb' into the other teams base (read that as a light up bouncy ball) and finished on humans versus zombies. I volunteered to be a starting zombie and think I surprised the kids (event was strictly 11+) with how fast my old feet can take me!
I've previously done paintballing and wasn't very keen as people took it too seriously, and friends of friends I know who are into air soft have put me off the sport by bing far too serious again and treating it too seriously. I mean, they're all toy guns at the end of the day!
So yes, was very pleased at how welcoming the community was to us! Definitely think we'll be along to another event or two, once the bruises calm down...

It's been a busy little week and I don't have much to show in the sewing side of things - I really must just focus on one project and not dither at the three! Hopefully there will be something to show for next week.

Firstly it was up to Perth for a girls catch up with my Inverness based friend. Owing to the hubby working Missy came along for the adventure and we managed a nice day first having lunch at Brewdog and then, after a wander along the high street, some tea and cake at the Bark and Chew. 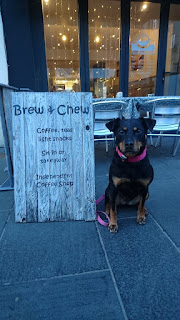 Missy got some cake too as we all agreed that this was definitely the way to cater (or pander to be more accurate) to dog parents. Firstly Missy was given a blanket to lie on and then her own water bowl with a complimentary gravy bone before I ordered for her the puppy cake. As we waited for our cakes, we admired a spaniel (very bouncy) a dachshund (very dapper) and openly enjoyed the large GSD who could howl 'I love you' in response to his owners declaration of affection.
The cakes were absolutely delicious and I'm not sure what kind of doggy cake it was Missy got, but it certainly didn't last long! 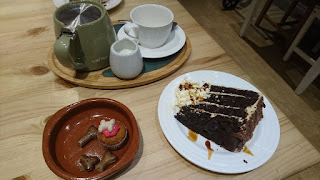 Yesterday was a proper puppy play date - I'd offered to look after Maisie so that my brother could take our niece out as a belated birthday gift and,since they were dropping her off, they decided to bring Ben along and the three dogs enjoyed a walk around our old favourite haunt of Dechmont.
I don't have any photos of the walk as I was too busy puppy wrangling. Missy enjoyed chasing rabbits and Ben had a rare chance off the lead and bumbled along with us, keeping a safe distance from the puppy. 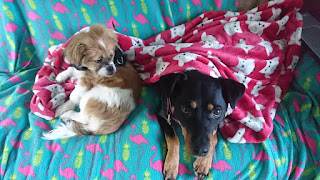 After saying cheerio and heading back to mine, both dogs relaxed and it was nice to see Maisie taking a reflective moment simply gazing out the window. A novelty I suppose for a dog living in a first floor flat, but she was very content and wasn't worried about going out when I opened the door for her or playing with all the toys I put out.
Chaos ensued when my brother turned up and she was suddenly a naughty little puppy again and jumped on the table! She then started barking and jumping on Missy and playing with her toys. He didn't believe me how calm and relaxed she'd been, so I'm fairly certain he's completely wrapped around Maisies little dew claw!

Sewing has taken a bit of a backseat. I'm dabbling in three separate projects based on how much time I have available and haven't made as much progress on any of them as I'd have liked. Hopefully I'll have a quiet evening or two and make a good push on some to have something to show for next week.

Overall a good weekend, but tiring! However there is no rest for the wicked and next weekend is booked out too for adventures. Perhaps one day I'll learn to slow down!
Posted by Rachel at 10:03 1 comment:

Well, hopefully we wont continue the year as we've started! Everyone, Missy included, has the cold and generally suffering from January Blues, so I'll focus on the more upbeat moments of the week. 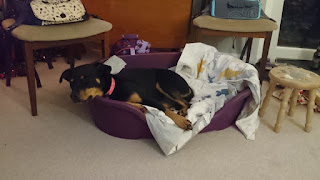 We saw in the New Year with friends and it was a real struggle to get to the bells. Missy gave up and was happily asleep for most of the night and we grown ups all decided to meet up again when the fatigue of Christmas had worn off for a take two of the evening.

Walk wise its been rather chilly and staying to the usual dog walks - we're hoping to get properly adventuring next weekend. We weren't stealthy enough with Christmas so Missy overly worried her paw and got an ear infection - thankfully that's mostly cleared up now so I managed to get Missy out for a photo shoot to model her Christmas gift from her aunty: 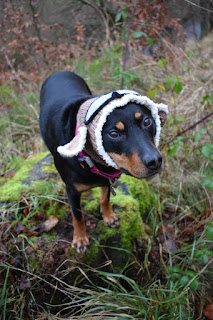 Every dog needs a Biggles inspired hat! Perfect for the cold weather adventurer! And if the doom and gloom brigade are right, we're going to have lots of snow again this year, so we may well need it.

The first week in January marks my eldest nieces birthday - shes (shock horror) now 14 and wanted a Stitch (from Lilo and Stitch which is officially her favourite Disney film) birthday cake. Knowing that she is truly of the Instagram generation, and that she had been up-selling her cake to all her friends, I knew my work was cut out for me: 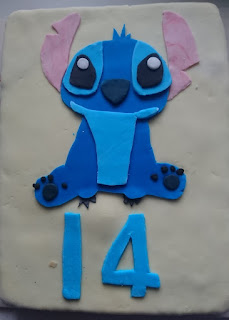 I'm rather pleased with it! In addition to baking, I also decided that this was the week to blitz through my sewing "ignored-for-eternity" pile - we all have one, you know, that bundle of items where someones asked you to adjust something they could easily have done themselves, or you've bought something cheap and it needs tweaked a bit or previous projects that you hate the result of and need to just get away from it for a bit, that pile. Well, mines had gotten out of hand, so I decided that this was the week to get a dent in it.

Two dresses adjusted, a complete refit on a hi-vis coat for Missy (it was on sale for £5, it looked big enough for a pony but it was only a thirty minute job to fix!) and a reworking on a completely failed project. Background; I'd gotten excited about pinny dresses, I had a super cute fabric and was overconfident in my ability to self draft a pattern. The result was horrendous, it was like wearing a potato sack and was about as flattering as one. So I shoved it aside and vowed to get back to it.
Well, that was...two years ago? Must be. So I dug it out, popped it on my dress form and just took the time to see what was wrong and reworked the pattern. I added a waist, button side closures, tucked it in and shortened the hem and I'm pretty pleased with it (and totally regretting not taking a before photo! You'll just need to believe me about how awful it was). 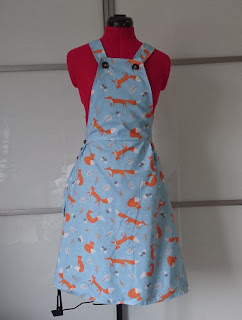 Tada! And apparently they are coming back in fashion, so a double win!

Hopefully next week we'll have some adventures to share, so until next time!
Posted by Rachel at 09:25 2 comments: