I am referring to, of course, Victoria the female polar bear in the Highland Wildlife Park, and her cub who is being very well advertised as the UKs first cub in 25 years. With a friend of mine recently moving up to the Inverness area, two birds were killed with one stone as another friend of mine and I visited and we three went to try our luck seeing the baby. 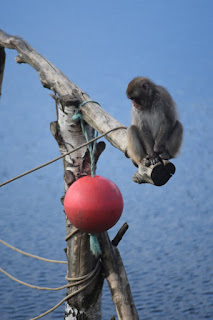 With the drive up being horrendous fog, we weren't hopeful, but Saturday cleared for us and turned into an absolutely beautiful day. I don't want to be a jinx again, so I'll just say that it felt like a season we all sorely want had arrived!
We arrived fifteen minutes before the park opened and were shocked to be in a quickly building queue. Fortunately we had prepurchased the tickets and got in no problem - apparently last week the park filled and they had to turn people away. 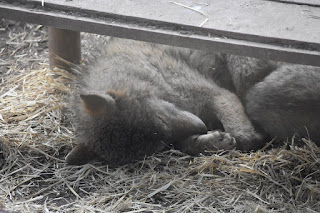 Weirdly enough, despite the fact that by lunchtime all the car parks were full, we only ever felt like it was busy at the talks and at the female bear. Of course that was one of our first ports of calls (after the red panda) and we were fortunate to see mother and baby straight away. I got some photos, but with them being right at the back of the enclosure they weren't great. I was super pleased just to have seen them and we continued on with our day. 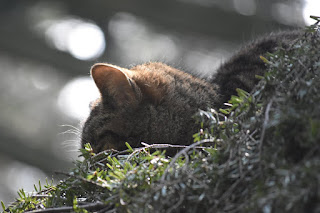 The snow monkeys put on a terrific show for their feed and then it was the big cats and the wolves. It was one of those rare days at these kind of parks where we saw everything. And even managed to get good photos of them all. 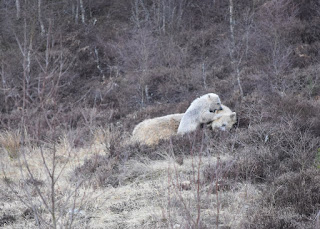 After lunch we went back to see Victoria and her cub and we were treated to the cub (it's not known yet if it's he or she) having a wee swim before playing with mum in the long grass. I got some photos I was pleased with and then we just spent  about half an hour watching them and chatting to the keepers who were doubling up as crowd control. 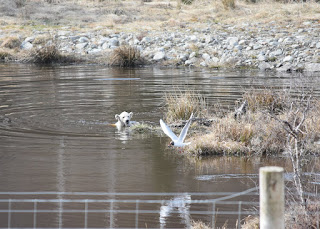 A very successful trip. Although I was pleased to hear that, once they know if it's a boy or girl, the cubs name will not go out to the public to pick (although they may allow the public to vote from a shortlist) - they don't want Furry McFurface the polar bear! 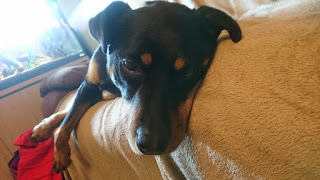 And I can't forget my own Missy McMischief. After the drive home today, I was very pleased to be welcomed with a big cuddle. I'm always worried she'll take a huff with me when I'm away. So after cuddles we both had a well deserved walk in the sunshine.
Posted by Rachel at 11:05