A tail of two Abbeys

The weather this year has officially been crazy. After flash floods on Monday, Thursday and Friday were hot enough that my poor tomatoes have heat damage (lots of water and a dose of tomato food should hopefully revive them). That's right, in the space of 8 weeks I've had frost damage and heat damage. I honestly couldn't make this up!

With the good weather set to turn over the weekend (typical) the hubby and I decided to go and follow the sun south to the borders and visit first Jedburgh Abbey and then on the return home, Dryburgh Abbey. There was an ambitious plan about also getting Melrose, but we shelved that as too ambitious the moment we arrived at Jedburgh and were offered the audio tour. 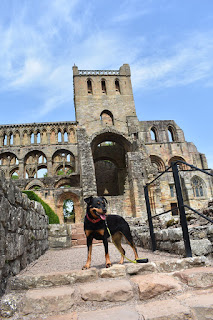 Now, I'm sure I've mentioned before that hubby is quite severely dyslexic and, whilst he refuses to let it stop him or put him into some kind of social box, he really struggles going around anything heavily word based that involves having then having to read with the distractions of a) other people, b) the dog, c) other people's dogs and d) dustmotes. It is one of the reasons we love and advocate the kids quizzes, they give us a nice stop by stop tour of the place, encourage finding the important answers, make sure nothing special gets missed and, most importantly, a sticker for the scrap book upon completion. 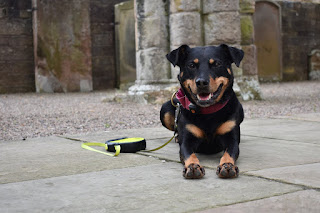 Audio tours on the other hand, let him unlock everything about a place. And I mean everything. Not a number shall be skipped, it shall be done in order and all interesting facts will be relayed to me as I'm having far too much fun photographing Missy and skimming the information boards to bother with the tour myself. I do enjoy them, and don't mean to belittle them at all, but for me, having the hubby recite weird and wonderful facts at me is far more enjoyable.

I digress. Long and short of it, once we knew there was an audio tour we knew there was no risk of it being a quick fly by look of the place so decided to scrap off one Abbey from the list. Better to do less well and enjoy it than rush three things and feel like you missed something. 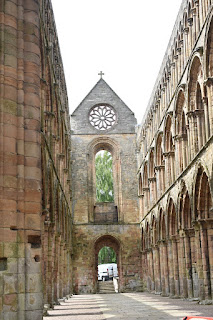 It's unkind to Jedburgh Abbey to assume it would be a quick visit. Barring roof and upper floors, it's remarkably intact and and is huge. Built in the late 1100s with a red stone, it dominates the small town of Jedburgh. They're obviously very proud of it and, after going through an elevated viewing room filled with wonderful and odd little artifacts (loved the comb with Hercules) the place was immaculately well kept. We enjoyed a picnic looking up at the Abbey before exploring (I'm getting worried that Missy is starting to pose on her own accord, she went onto the bench without prompting and sat and smiled at me beside the hamper). The audio tour was a bonus as we found the stone room which had some great information about how they built the place (it took that long that Roman went out of fashion and Gothic came in, which shows in the shape of the vaulted windows)  and enjoyed the views from the viewing platform. Most definitely worth a visit. 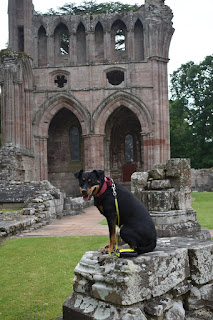 Dryburgh, a twenty minutes drive away back north, was an Augustine abbey as well but, unlike Jedburgh which is in the heart of a city, Dryburgh was very isolated and had some woodland to it. A very different atmosphere to effectively the same type of building.

Built about the same time as Jedburgh, this one is predominantly gothic and, has the added interest of having been bought in the 1700s and done up as a romantic ruin. It felt a very different place to our first abbey and, whilst I couldn't pick a favourite, Missy clearly preferred this one. There was a rabbit to point at and field mice to stalk, important misadventures when getting ones history lessons. 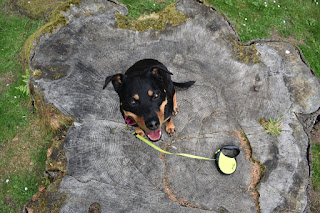 The trees are huge, and it homes one of Scotlands oldest yew trees (hint, it was ginormous) - they are clearly very proud of the trees as we were eagerly handed a sheet of the important trees to find whilst being given our quiz. Missy was fawned over by the staff and we bought her a Harris Tweed collar from the dog display which had a matching bow. They've also introduced tap water bottle refills (which they kindly did to resupply us with water for Missys return journey) and it's something I'm super pleased to see and want to see more businesses do.

We timed our trip home well, the moment we entered the Edinburgh limits the heavens opened and it poured down with rain. 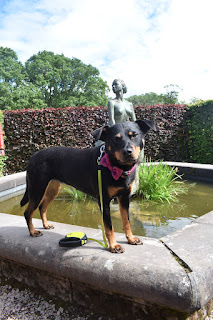 Missy got to wear her lovely new collar on Sunday as we went to the eagerly anticipated Paws at the Palace at Scone Palace (I really must visit the actual palace sometime - I've done loads of events there now!).

After the wash out of Dogfest, and a forecast of showers, I was armed with wellies, umbrella, full waterproofs and a rain hat. Guess what? Didn't rain! We spent the whole day avoiding talk of the weather so as not to jinx it, but it was that perfect dog weather of sunny with a cool breeze.

We checked out the stalls and watched the flyball have-a-go as well as the gun dog have-a-go (basically retrieving skills) and had a laugh that whilst Missy would be very good at them, it's such a pity she has no inclination to tennis balls and therefore wouldn't turn her paw to them. We did have a go at agility and she became best buddies with a bonkers collie mix - I'm sure she was somehow leading that dog astray whilst being on impeccably good behaviour herself! 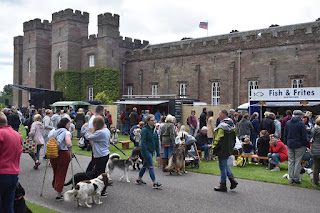 There was a DJ and a dog parade (we didn't bother joining in with the parade, it clashed with prettiest girl and Missy wouldn't have enjoyed being in the rabble)  and the time honoured dog show where she didn't place. I think had there been fourth, she may have gotten something at prettiest eyes, the judges were taken with her and chatted to us which wasn't the case with prettiest girl, but it doesn't matter, she had fun and the entry fee went to a good cause.

It was the events first year and I think they weren't expecting it to be so successful - there was only three portaloos, and the contest overlapping the parade was a schoolboy error, but overall I was very impressed with it and hope they throw another paw-ty next year.

I have one last announcement before calling it quits for the night - look who has officially joined the family! I can't wait till Ruby has had all her vaccines and we can go visiting! 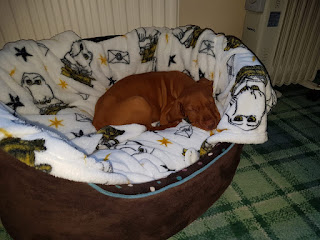