Well, you can't predict the weather! This weekend was the much anticipated DogFest that Missy had won tickets for and we ended up going down just us as the hubby was working and couldn't get out of it.

The plan was to crash at my sisters the Friday and then we'd all go along the Saturday. The weather was forecast for showers, but we're all outdoorsy types and own waterproofs and wellies, so figured it would be fine. The plan was to go for lunchtime owing to my niece having a swimming lesson (for 5, she's doing brilliantly and has managed to get herself up a class so she looks tiny compared to her peers) and then we'd head over and catch the festival. The itinerary showed that the day repeated itself, so we knew we wouldn't miss anything with the later start and, my sister having heard horror stories about Tatton Park and getting parked, was keen to miss the first in barmy. 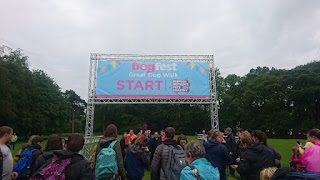 That's probably where the day went to plan before going all wrong. We parked nice and easy and, as we had our tickets already got to stroll past the massive queue and it was all looking up. Missy got given masses of treats owing to a stall holder taking a shine to my niece (he apologised and said he desperately wanted a girl, having all boys, not that Missy complained) and caught the last song of the dog dancing.

All good so far. Well, the heavens then opened. And it rained. And poured. And heaved it down before, for good measure, chucking it. The promised shelter was inadequate for the number of people and the number of very wet and high strung dogs (sorry, don't care what people say, they don't like being squashed in crowds, I always try and find space for Missy to be able to breathe and not get stepped on). 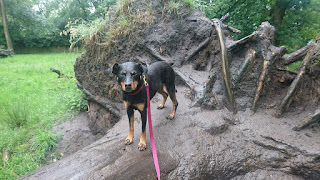 We darted and dashed from stall to stall, looking for ones with gazebos and some physical space before there was finally a break in the weather. Some doughnuts and finding the fair ground games (skittles, magnetic fishing and so on) soon brightened the kids up who then decided that they had had enough of standing about and didn't want to watch the dog dancing or agility. I can't blame them, but it put Missy in an awkward position as she also had some energy to burn. We agreed that my sister and I would do the dog walk with the youngest (2) whilst BIL went with the niece and found a proper play park.
If the sun had stayed out, I think we could have turned the day round and salvaged it, but no, ten minutes into the walk it started pouring again so we abandoned it, relocated the remaining family and called it quits. It wasn't fair on anyone by that point - kids and dog were soaked through and adults tempers were fraying with the want to be polite to one another and not can the day whilst being concerned about everyone's health at being so wet.
I'm gonna be fair to the event and not judge it - we didn't see enough of the activities to gauge the quality of the thing and stalls are stalls at the end of the day. Perhaps next year if the weather is looking better I might give it another shot.

We had scoped out a dog friendly pub and, after showers and fresh clothes (including a early birthday gift for myself from my sister of a gengar jumper which I am tremendously happy with), we ate there and had a pleasant, though tired, dinner. Once kids were in bed we managed to chill out and catch up.

I'm sure once my frustration at the weather being absolutely against me doing anything nice with my sister wears off, I'll find yesterday funny and shrug it off, but at the moment that song comes to mind:


So I just did me some talking to the sun
And I said I didn't like the way he got things done
Sleeping on the job
Those raindrops are falling on my head, they keep falling

Perhaps I need to tell the sun off for being lazy! It's really turning into a wash out of a summer - but I gotta keep looking on the bright side; I got to see my niece at her swimming lessons (an overdue promise), I got to hang out with my sister and her family on their turf, my sister and I are more organised about my mums party later this year and Missy got to hang out with her cat-cousins, one of whom (Dashie) is beginning to figure out that Missy isn't going to chase and murder them all. I do love that cats look of abject horror as the other two are completely disinterested in the dog in the room!
Oh, and I got handed a bag of fabric to add to the stash. Mustn't forget that!

Well, that's all for now, hopefully the weather starts to improve for next weekend!
Posted by Rachel at 11:45