Back to Regular Programming

Just a short post! The hubby and I are back from a two week holiday in Oz and, whilst we missed our Missy terribly, we really didn't want to come back to normality. I can officially say that I most certainly have a dose of the post-holiday blues...


Whilst we were away doing all the usual holiday things (hugging koalas and dingoes, eating copious amounts of ice cream, trying all the new sweets and cakes, avoiding the enormous spiders and so on) Missy stayed with the in-laws. As I previously mentioned, Flash passed away and that was literally the day before we drove up, so it was a bit of a weird get together. I think Missy was good for them to have about, she certainly cheered everyone up with her Romeo and Julie antics with Duke next door.


I wont go on too much about the holiday except to say that we had an absolutely amazing time, although trying to squeeze in Sydney, Yulara and Port Douglas into two weeks meant it was non-stop tour-de-force of a holiday. I loved every minute, but another week would have been nice!

Highlights were certainly the tour days - seeing the Three Sisters in the Blue Mountains, the sun set and sun rise on the Uluru, the tea tour in the Daintree rainforest and getting the train to Karunda were all brilliant. On our 'quiet' days, doing all the wild life parks and just exploring the cities was amazing. I wont go on any more, or I will be here all day, so I will leave you with one little anecdote of a story:
As a way to fill evenings in Sydney, we went possum hunting in Hyde Park. First and second night, no success. Finally, our last evening and we spot a man and his daughter pointing at something, lo and behold, a possum! We took a long moment to admire it and, after explaining what it was to the pair, waved them off before we hear a rustle - it must be another possum, but its small, a baby possum!?
Then it opened its wings and flew straight over my head.
A fruit bat! I got such a fright but it was equally amazing! 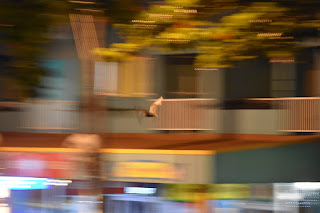