A busy little weekend with all the family visiting - firstly I had the in-laws pop down on the Friday in order to meet a very important puppy: 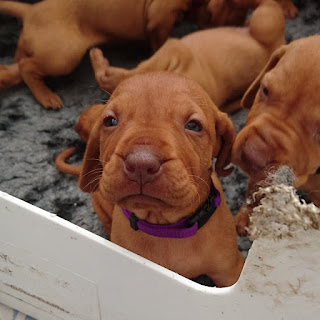 This is Ruby, Missy's newest little cousin. At three weeks old, she's far too young to come home, but we were delighted to go and visit her. Despite a litter of ten, the mother dog was anxious as her puppies were held, but the in laws seemed to pass some canine maternal test and she was soon happy to let them have pick of the litter.

It was the Agria Dog walk on Saturday and Missy had won tickets to go along. We're always keen to support the Edinburgh Dog and Cat Home and the notion of a sponsored walk from Seafield to Joppa and back (3.1 miles) seemed a rather nice way to spend the day. Maisie came along for the adventure with my mum literally in tow. It was supposed to be a gathering of the cousins with Wee Ben, but last change work commitments meant that he missed the event.
We did have a bit of a laugh at my father in law who was proudly showing off little Rubys picture to the other dog walkers along the way. She's already a much loved little thing! 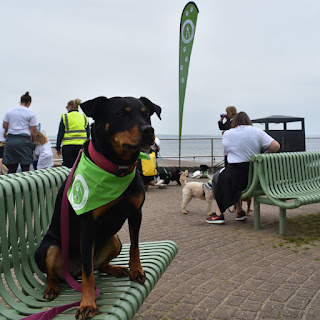 The weather held for the walk itself and we walked along the promenade up to Joppa and then the beach back down to Seafeild. Most of the dogs had on EDCH bandanas so its was really easy to see who was all taking part and it was great to see so many dogs at the event and Maisie is doing really well with her socialisation. 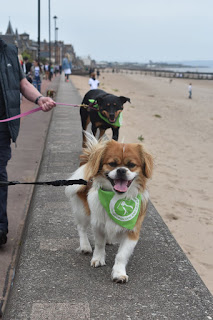 There was also a fun day afterwards and my Manchester based sister managed to arrive in time to cheer Missy on in the Prettiest Girl and Best Rescue competition. Sadly she placed in neither, but that's OK, she's certainly first in the opinion of the family!

Weather was terrible today so we split up in a boys and girls group with my sisters family and us girls went to Deep Sea World whilst the boys had a quiet day in. It was a really good day although it got very busy after lunch. Highlights were definitely the naughty hermit crab and watching the seahorse feed.

Now that I'm not worried about spoilers, here's a little gift I made for my sister: 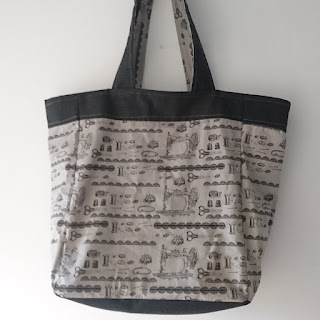 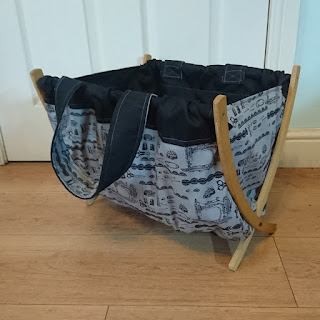 A matching set - a project bag and sewing basket. The basket is an upcycle, the original fabric was  ghastly 60s throwback and the seams had given up in a few places: 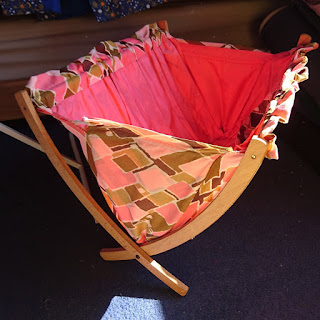 Its been a glorious week for weather. Tuesday hit low 20sC and its been shorts on and no coats. I had spotted the Fisherrow Harbour Festival a few weeks back as a recommended event on Facebook and had roped my friend into coming along to keep me company as the hubby was working all weekend. 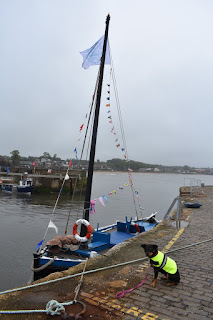 Saturday morning arrived and so did the rain. The fine misty rain that creeps into the bones despite the mild temperature. We were belligerent and decided to go on ahead with going to the festival anyway. There was live music, a fire truck, search and rescue and the good old guess the sweets in the jar.
I think its a pity it wasn't nicer as the turn out would have been better, but we still had a nice time mooching about the stalls and watching the harbour being officially opened before Missy had a good run on the beach. It was a bit too chilly to hang about so, after watching the live band for a few songs, we abandoned our visit. 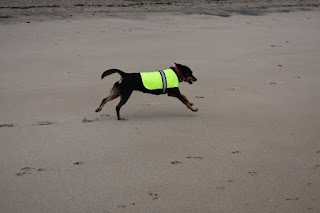 Ironically, my friends parents are so used to her going on walks with me and Missy that they have started recommending dog friendly places they've found. There was a garden centre by the Straighton Park and Ride they had previously recommended, so we gave that a try and were not disappointed!

I've had a productive week in the garden and in the house with my sewing. The vegetable patch is starting to take shape again after the frost and I'm pretty happy with how its coming together. I've started the annual saga of spring cleaning and keep fiding more fabric hidden away, so I've been thinking a little outside the box on what to do with it all. Sewing wise I've managed a string of projects, but I'll just share the one today as it ties in with the clean up: 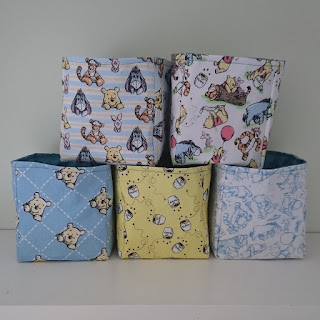 Some lovely Winnie the Pooh storage boxes. I'm super pleased with these ones as I actually used some old plastic bag-for-life bags instead of interfacing to stiffen them up. I dont know about anyone else but I seem to collect these types of bag and half of them are ridiculously oversized or awkwardly shaped! A good way to use them up without throwing them out. And it saves my interfacing for other projects. A win-win!
Posted by Rachel at 12:34 1 comment:

It was a last minute change of plans this weekend! The hubby managed to wrangle a long weekend at the last minute and so we decided to go see his mother for her birthday in Aberdeenshire and to get a well deserved break from the rat race (you know you are getting old when you look forward to bad phone reception!)

I had the dentist first thing Saturday, so we had brunch and headed straight up in the car. The weather has turned and, due to an overnight frost (the neighbouring towns had had snow the day previously) it was cold and we decided to warm up in front of the fire.
For those following my garden exploits, yes. The frost wiped out a third of the pumpkins. Thankfully I have spare in the cold frame I was saving for a seedling sale at work, so those will be staying with me! 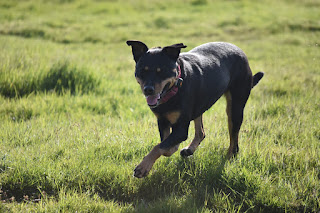 We had a nice walk about the fields and Missy was happy to watch and not chase the deer we saw. The bunnies were free game, but it was certainly rodents 5 and Missy nil by the end of the walk.


Sunday we offered to help next door who, on top of just having a baby, has ended up looking after her brothers dog in addition to her own. Missy has a Romeo and Juliet-esque relationship with Duke, the dog next door, and was unimpressed that his equally hairy cousin dog had come to visit. Duke is a who-knows-what that looks like a hairy carpet on legs and Pickles is a wire haired German pointer. They make a great pair running wild and boisterously playing, but Missy dislikes being outnumbered and waited till the end of the walk when they had calmed down somewhat to play. 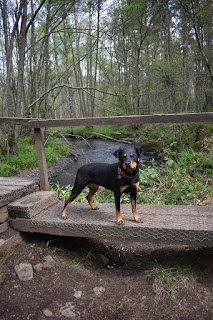 The afternoon dog walk was a drive down to Crathes Castle, a National Trust site that, whilst dogs are not permitted in the castle or main garden, are allowed in the surrounding woodland. The sun had come out and the wind dropped and we enjoyed something close to pleasant as we followed the trail and admired the many dogs we met. We were lucky enough to come across a flyball competition and decided to watch a few races. Missy was unhappy with the set up, which is unusual as she's watched agility shows and competitions with us before. We think the frantic barking was too similar to the shelter for her. There was a small marquee selling treats and she cheered right up at the freebies and a new Kong toy!

It was a year ago last Friday that my in-laws lost Flash, and you can tell they are wanting another dog now. They have decided on getting their very first puppy together (having always adopted rescues) and are waiting on a little girl Hungarian Vizsla as their next companion. We'd all hoped she'd be born on my MILs birthday, but in true stubborn Vizsla style that never happened.

Today was a get up and go kind of day. We invited the rugs next door on the morning walk and were all pleased that Duke and Pickles were a bit calmer. Missy and Pickles were flushing rabbits from the gorse whilst Duke excitedly ran about with them - I'm fairly certain he had no idea what the game at hand was, but certainly made up for that with his enthusiasm. They all failed to spot a young roe deer with his antlers, and I wasn't quick enough on the mark to get a photo, but c'est la vie.

Once we were all well walked we headed back in for some brunch and were dismayed as it started to snow. As you can see from the photos, though cold it was actually quite a pleasant morning - so we certainly timed that well. Once the weather broke we got in the car and headed home. Missy has been playing with her new Kong toy as we unpacked everything again and it looks like another walk and then a quiet evening. Well deserved, I think!
Posted by Rachel at 07:56 1 comment: