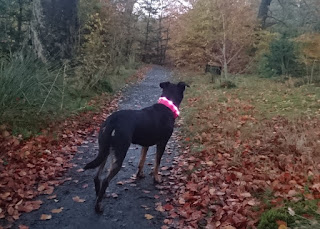 Well, we've had our first snowfall of the year and the nights are officially drawing in, so in my books, winter has arrived. Its not all gloom and doom, we have an action plan in place to try and help Missy get over her Christmas phobia and December is pretty much full up already with plans to see people and spend time with one another. 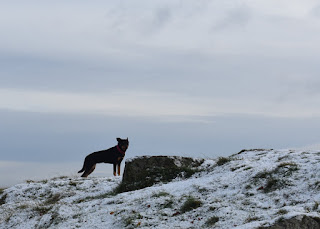 We managed a lovely winter walk up and around Cockleroy today. It was surprisingly busy around Beecraigs, but we had the hill to ourselves for the most part. The wind was bitter though! I thought I was going to get blown away and Missy just showed off and trotted around us happily. She loves the snow, all the scents sit fresh on top of it and, thankfully, we only lost sight of her the once. She came back to us a minute later looking mighty pleased with herself and out of breath, so she had fun!

In other news, our plecs have had babies again - slightly later than last year! We spotted the eggs straight away and got them into a nursery tank this time, so no need to try and stress out fishing tiny babies from the big tank. Its been tremendous fun watching them grow up from eggs, to larvae, to fry and now proper juvenile fish. We hadnt expected so many to survive, but out of the whole clutch we've only lost half a dozen, so out best estimate of 70-100 fish still stands. I already have a shop lined up to take them off us once they get a little bigger, so its all ok, although I am watching out in the main tank in case we get another cluster of eggs!

I'll leave you with the development photos of the babies and aim to be back soon - I've got some fun sewing projects on the go that I'm looking forward to sharing, and if all goes well, Missy is meeting someone special tomorrow! 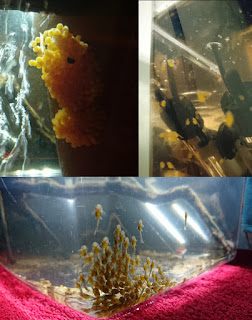 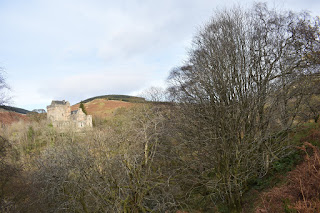 Well, Autumn is well and truly underway and we've officially moved to the 'off-season' part of the year for interesting days out. CastleCampbell has been on the to-do list for a while now as its the site that the Historic Scotland app recommends for taking your dogs.

And we were not disappointed. We parked at the 'low' car park and took the walkway up to the castle - we were told it should take an hour to do the walk, but even with my constant stopping to try and get another waterfall photo, we managed it in half that. It was good or Missy to get off the lead before we did the castle as we had left quite early and therefore she'd only had a very short walk to begin her day.
As with most castles of the central belt, this one was a symbol of wealth and power and had never really seen any kind of attack barring one where Royalist rebels tried to burn it to the ground over two days. Originally known as Castle Gloom (derived from the Gaelic meaning chasm) it is situated at the top if a hill and surrounded by gullies and waterfalls. There is enough still standing that you don't feel cheated out of a castle, but it's certainly one of the smaller sites.
The views from the tower were stunning, and as always we did the kids quiz. No sticker this time for the hubby, even though we got them all right! The 'gardens' is also a 3 tiered garden with lots of benches - inside the tower there is even a sort of picnic room, so it's definitely one of the best equipped castles I've seen in regards to providing space to sit and eat.


There was plenty of dogs about as well, which is always nice, and Missy showed off her spiral staircase skills to her new canine friends. By that time it was getting cold and the light was beginning to fade (the nights are certainly drawing in quickly) and we took the longer route back down to the car park and enjoyed a stunning view of the castle. Don't let the length of the post fool you - we had a wonderful time and are already planning on taking the in-laws when they next visit! 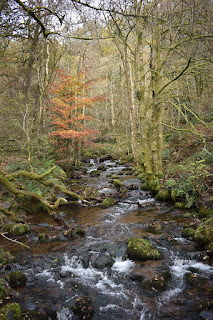 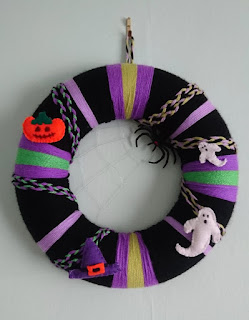 Well, a belated one!


This Halloween as been unusually busy for me - the last few years have fallen flat with everyone too busy to do anything, and then this year I got several invites, including a doggy parade in Manchester (next year, I have to go next year!) and a puppy disco in Glasgow. Owing to the fact that I was working, I couldn't go to any of them except for a family party.


So this years party all started as my tweenage niece wanted to dress as Pusheen for Halloween. She is savvy enough to know that the costumes available are massively overpriced and that her aunty (ie me) is completely gullible and happy to take on a challenge.

And then my nephew jumped on the bandwagon! He wanted to go as Owen from Jurassic World, only he couldn't get a waistcoat that was just right. None had pockets. Or they were black and not brown. Eyelashes fluttered and: 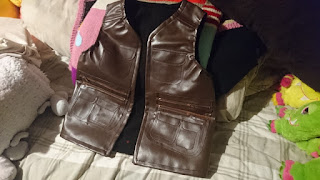 Well, I very well couldn't let the kids have the best costumes and not make an effort myself! So I followed on from our current pokemon phase and made Missy a Houndour outfit. The hubby and I went as Ash and Misty to compliment Missys outfit (yes, I had chosen hers before ours!) So I'll leave with the comment that we had a great night. I had brought Just Dance on the Switch and we just spent the night dancing away - although I am slightly concerned that my nephew dances better than my niece!