Its that time of the year, the mornings are frosty, lights twinkle in the dark evenings and decorations start to appear in windows-
Wait, its only November.

So, Christmas is beginning its creep into our lives and, whilst I disapprove of Christmas stuff going on sale before Halloween, the whole nonsense that is Black Friday and the fact that yes, some of my neighbours have already started decorating, I do think it is the right time to get the Christmas Markets up and running. For the second year running, I've managed to get along to the Edinburgh Dog and Cat homes Santa Paws Christmas Market. This is where Missy came from, and its a charity that I feel is completely overlooked, so I try my hardest to get along to the fundraising events and join in.


And of course, the fleet of dogs in Christmas jumpers, reindeer antlers and tinsel. One cant forget the real reason we go to these events! Cousin Maisie, who is now a regular feature here, is having a real push on her socialisation and desensitisation - so a market full of dogs we know in advance will be good with other dogs, in a place where we know no one is gonna be offish or afraid of dogs, is a perfect place to ramp things up a little. As expected, the little fluff ball was utterly adored, and Missy wasn't left out as her chilled back demeanour was praised alongside her little eyebrows. 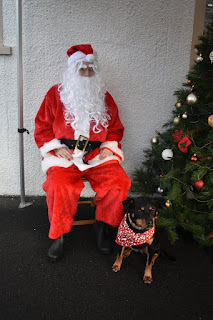 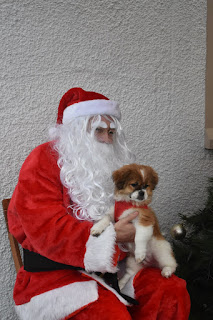 The weather was  really against everyone. Rather than the forecast light rain in the morning and a sunny afternoon, it was pretty heavy squalls with a high wind. As we arrived, they had aborted the outdoor element to the market and were moving the stall holders all inside. We were assured that the pups would definitely get their photos with santa paws, and I'm pleased to say that they did. Missy, who is most definitely on the good girl list showed off her impressive sit and stay skills whilst Maisie was made to sit on Santa's knee. We suspect he will overlook her naughty ways on account of the fact that she's such a young puppy. Or perhaps she'll just pout until she wins him over! 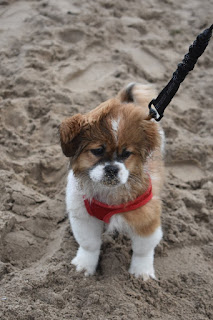 We finished the day (after Missy sampled all the freebies, a pooch after my own heart) with a very bracing walk down the promenade and on the beach. After being on her absolute best behaviour, Missy was off like a rocket on the sand and bounced and bounded all about us. My poor brother was towed along by an exuberant Maisie who was desperate to keep up and then he and I ended up spinning in circles as we tried not to get tied up in Maisies lead and Missy ran laps around us.an absolutely brilliant end to an enjoyable day! 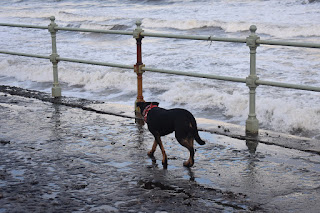 I can't claim that this was Maisies first time on a beach, but it was certainly her first shot on sand and she took to it like a pro. I adore it when Missy deigns to play with her, she can play very nicely with puppies, although it's very much on her terms still!

In non doggy news, my latest (and most ambitious sewing project) is very nearly done, I just need to add the button holes. In the meantime, here's a sneak peak at my first ever double welted pocket with flap. Oh yes, this amateur seamstress is giving tailoring a go! 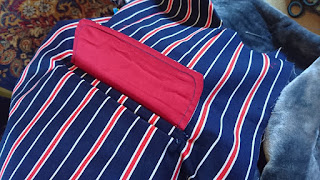 But first of all, I encourage everyone to go to my sisters blog were Missy has been immortalised in wool - no spoilers, but its pretty awesome. 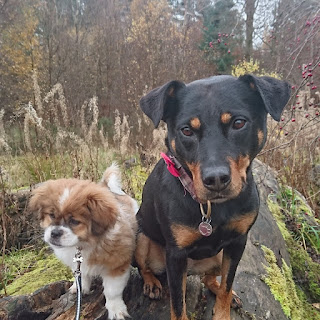 Missy got the all clear from the vets and, with Maisie finally good to go out and play having had all her jabs, we finally got that puppy play date. Keeping it simple, I organised for my brother to come to mine and we took them both around the local park. Pouty-Lip, as I have dubbed Maisie, hasn't quite got the idea of the point of a walk, and simply enjoyed meeting other dogs and being fawned over by the other dog walkers. Saturday was Missys first day of freedom from both cone and lead, so was far too preoccupied seeking out squirrels and weeing in all the off road patches to care.

My brother is hoping the idea that the toilet is done outside will rub off on Maisie by seeing Missy doing so, and we had one successful outdoor wee, so fingers crossed. She is very much a puppy, chewing everyone and everything, and has yet to learn her manners around other dogs - one thing I know for certain Missy will teach her! It was a good day, and my brother is keen for more play dates, so I'm sure you'll all be seeing much more of the fuzzy ball of fluff!

I've been busy crafting away and, whilst most of it I will save for a more seasonally appropriate post, I will share this Slytherin scarf. My hubbys cousin (who has not read the Harry Potter books) is somewhat surrounded by family who are all a bit Potter daft (other cousins have produced small wizard-daft children, and both his mother and aunt (my MIL) are completely daft on the books). He has finally caved in and decided to get a matching scarf like the rest of us, and declared that he wanted to be in the "Naughty House", and thus: 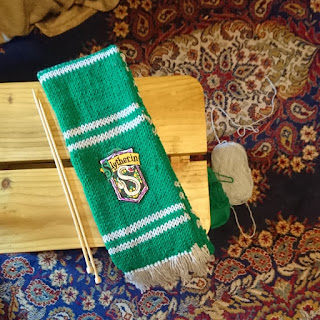 The importance of the date has not escaped me. With it being a 100 years from the end of the war that was to end all wars, there has been a lot of events and articles about what happened then and since. There's also been a big push from Poppy Scotland and the Poppy Appeal and I've seen, for the first time, a lot of products being sold for dogs. Missy is too large for the bandannas that I found, and I wasn't keen on a dangly charm she would likely lose, but I was rather enamoured by the collar poppy.
I'm sure there's an argument about projecting our political opinions on our pets, but Missy has received nothing but compliments on hers. And to make things fair, I put together a purple poppy for her to wear alongside the red. For those who aren't aware, and I only came to realise what it meant this year myself, the purple poppy represents the animals that have lost their lives to protect us in war, so I felt it fitting. I tried to find her an official purple poppy, but failed, so perhaps next year we will see some more animals remembering their kin.

So, for all who have served to protect this country, whether they have given their lives in battle or have taken those wounds home with them, we remember you. 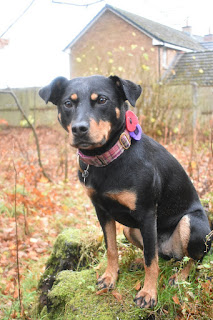 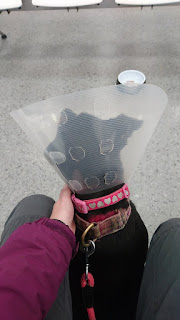 Lets rewind. My work allows us two volunteer days. After our superb Halloween weekend I took the Monday to help out at our local zoo. Whilst there I helped take up the floor of the porcupines (who were very disgruntled at being kicked out of bed) and then made a gate for a giant bunny (who unlike the porcupines, was glad to see me and kept trying to nibble my ankles). And then I finished the day getting to feed the lemurs: 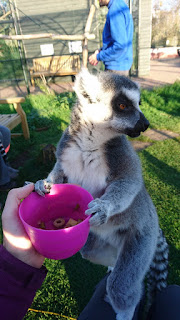 Pretty epic day, right? Then I got home, clipped the lead on Missys collar to take her out (I'd been crawling about in a porcupine bedroom, goodness knows what I was covered in but I needed a shower so was just going to go straight out) and then spotted this bright red mark on her leg. Well, it was pretty large and down to the meat, so we went straight back inside and I rang the vet for an emergency appointment. Thankfully Missys misspent youth means that I own our own buster collar and so we arrived at the vets. A call to both the hubby and the dog walker has left me with the mystery of how she came to have such a bad cut, but we have all decided that whats probably happened is that it was so deep it didnt bleed (and was therefore not noticed) and then she's worried it open.

So on the vets orders, its been short walks on the lead. We graduated from 5 minutes to 20 after a stitch check and hopefully they'll be out Friday and all will return to normal for the next post! It has meant a quiet weekend for us all (which is never actually a bad thing, I have a bad reputation for burning the candle at both ends with work and adventuring). I decided if we were having  pyjama weekend that Missy should have some pjs too, and here's the end result: 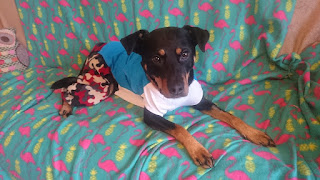 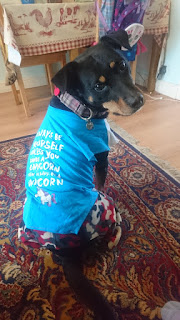 I'm going to say now, I dont like trousers on dogs. I'll put Missy in coats and dresses but the line in the sand has always been at trousers - they look weird and they impact on movement. Well, with a cut to the thigh and a reputation for licking, I was at my wits end. Missy despises the cone of shame and I needed something to act as a deterrent so that I didn't have to stick the cone on her just to boil the kettle, and the hubby suggested a trousers.
I think it works paired with her unicorn t-shirt and they didnt turn out as terribly as I expected (although drafting the pattern took two evenings alone - a dogs natural shape does not lend itself to trousers very well!)


And that's been the weekend. Lots of sewing (photos to come shortly) and cuddles on the sofa. The hubby and I snuck off to the cinema and even managed to get most of the Christmas shopping out the way online, so there's a bonus too!

Fingers crossed the vets give her a clear bill of health on Friday and we can commence with the regular schedule - Maisy, the puppy, had her last jags and kennel cough, so I expect a puppy play date to feature next week!
Posted by Rachel at 10:17 1 comment: