It's been a funny old week with the weather - each morning I scrape ice off the car before going to work and then the temperature ramps up with the sunshine to a near-tropical 11-12C. Unless you are in the wind, then you may as well be huddled amongst the penguins in the antarctic.

Still, I've done well with the garden. The grass has had its first cut, my indoor seedlings are threatening to either take over the world or move out and go to college and my outdoor ones have been well enough protected from the frost that they are slowly showing their little heads. Except the tomatoes. I broke and brought them in and they have appeared to have survived their brush with icy death and begun sprouting on the windowsills. Apparently you can develop green fingers as you grow older - I would never have imagined such success even as little as a year ago. Although I may have to give away some of the seedlings, no one needs almost thirty pumpkin plants (of various kinds I add, but still, that's a lot of gourds at the end of the day!). 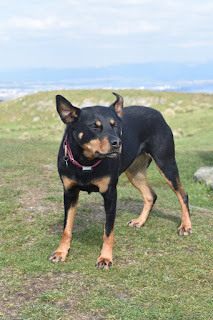 Missy has enjoyed a lot of company this week with the way the hubby's shifts have worked out so we didn't feel a compulsive need to be off and adventuring. Both of us are also suffering a bit from burning the candle at both ends the last few weeks, so we decided to enjoy a long walk around Beecraigs including a trip up Cockleroy where we all felt like the wind was going to blow us away. 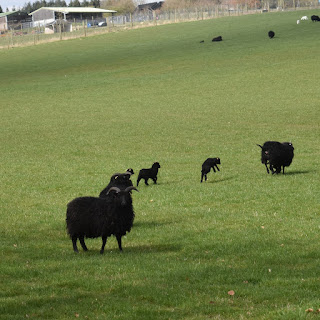 Truly though, if you are in the shelter of the woods, spring is here. We saw lambs and calf's frolicking in their fields whilst Missy sniffed through the undergrowth in the hunt for young rabbits and squirrels. El-ahrairah were on their side yesterday and she found none. Still, she enjoyed meeting some other dogs and her etiquette when waiting for horses to pass was much admired.

It was a girls night (with the hubby who these days is an honorary member) as my friend from Inverness came to stay the night. My more local friend came along too and we all played board games and ate too many biscuits and drank a lot of tea. A perfect evening for friends to catch up. We all agreed not to wait so long again and so hopefully we do manage another get together.
Today there was more hanging out and a bit of shopping before I dropped my friend off to get her bus home. I don't envy the four and a half hours it's going to take her! Missy was spoilt with lots of goodbye hugs and then a long walk around Almondell. 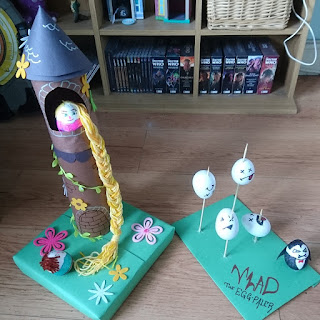 Sewing has been a bit on the wayside this week as I've focused on the garden, but I've managed to get three projects up and started, so hopefully I should have some fun bits to show off for next week. We did find time for some arts and crafts - this year we are resting the bonnets and doing egg decorating instead. Take a wild guess who decorated which set of eggs!

Now, time to get the house tidied up, but perhaps after another cup of tea!
Posted by Rachel at 10:54