Mothers Day Gone to the Dogs

That sounds like it was a bad day, but it went very well!


Its been a crazy week. There was a midweek one day trip to Ireland for my Dads wedding which involved getting up at 4am, catching the first flight out, finding and gathering the clan, watching the vows, eating far too much food and then getting the last plane home. A quick turnaround owing to the fact hubby couldn't get the day off on the Thursday, but it was worth it!


Saturday however was a disaster. The car failed its MOT and parts wouldn't arrive till Monday, so there was a mad panic to try and rearrange Mothers Day and at the same time figure ou just how on earth I was going to get into work on Monday. Whilst I can work from home, Monday I'm chairing a meeting and I need to do a face-to-face handover with a colleague who's leaving the company and who's position isn't going to be filled straight away - somehow muggins here has been landed with taking on the extra duties in the interim. Public transport offered an hour and a half commute as a best case scenario (sorry Scotrail, but I've had too many trains cancelled to trust you on that let alone a connecting bus) so I was very grateful to be offered a loan of my sisters car. My insurance let's me drive other cars with third party cover and, to quote her 'its a banger anyway, third party is fine!'.

To be fair, it is a banger. Can only be opened manually from the passenger side and the petrol gauge doesn't work when the tanks more than half full. But still, it'll get me to and from work and hopefully I'll have mine back tomorrow evening. Hopefully.
At least it's let me tick off another make of car off the to-look-at list - the failed MOT is the last straw, ours will be getting replaced before the road tax runs out.

So Saturday was a slightly outraged but quiet day for Missy and I. She's been stiff in the shoulder, so that was always the plan knowing that Sunday was going to be another play date with Maisie - our favourite Little Miss Pout Face. The quick revision of plans saw us organising a brunch at the Paw Stop, the little dog friendly cafe in Bathgate we went to the opening of with my mum and brother, followed by a meet up with the remaining Scottish leg of the sibling family back at mine. 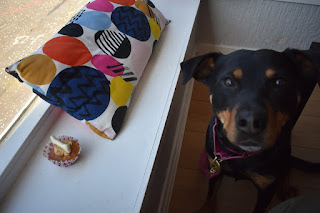 The Paw Stop was pretty quiet, which suited us as it was Pouts first time in a cafe and we were quickly enamoured with the canine employees Tara and Nala. The menu suited us all well as we all found something to our liking (both pooches had puppy muffins and some ham at dessert time). We didn't feel rushed and enjoyed chatting as all the dogs played together or took turns chilling out.


Then it was back to mine to see my sister, my eldest niece (14) and nephew (9) and Wee Ben. Wee Ben doesn't like Maisie. She's really calmed down since she first showed up in October (well, in a relative sense, she's still bonkers who has to say hi to anything moving regardless of its opinion in the matter and is constantly running about chasing balls or anyone who may try and play) so I was disheartened that he wouldn't even entertain a sniff from her. Hopefully they'll figure it out, Missy has certainly decided that Pouty isn't as annoying as she was at first and plays more with her now - a blossoming friendship. 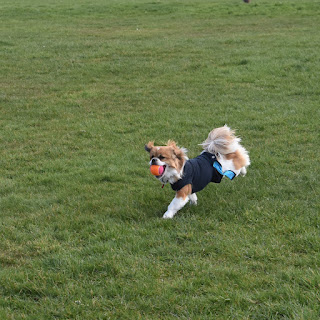 We took them around the local park, and we all had a quick play in the swing park too as it was deserted, and all three showed off their very different temperaments. Maisie running circles and loving life (even if that meant a wade in the bog of eternal stench, sorry bro), Missy stalking through the undergrowth looking for small furry animals and vermin and finally Wee Ben, plodding along with the humans looking like an extra from an 80s glam rock band (his fur desperately needs cut!). 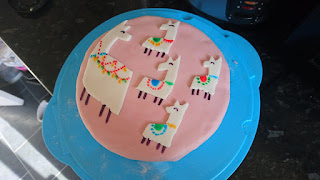 Afterwards it was cake and a chat. The cake was uninspired this year and I stole the idea off the mothers day card I'd bought, before adding in one baby llama for each of us, me, both my sisters and my brother. Came out surprisingly well! Although I was so keen to make sure everyone got a slice to take home I forgot to save any for myself!