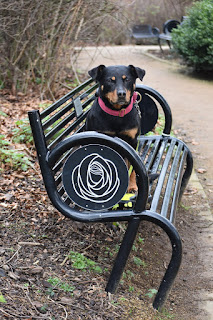 I've finally discovered a Botanical gardens that allows dogs - and with it being in Glasgow, it's not too far away for a wee day trip out.
The Glasgow Botanical Gardens is located beside the river Kelvin and is surrounded by the city. Missy and I were out with my friend and next time I would plan to park in a nearby multi storey or something as it was sheer luck we managed to get parked on the road (pulling off a swift parallel park I may add, my most hated road manoeuvre!) 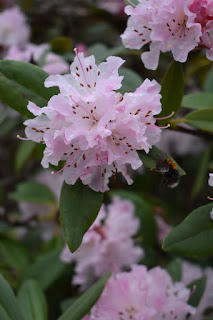 It's still barely spring, so I didn't have high hopes of there being much in bloom and was therefore surprised at the blossom on some trees alongside swathes of purple crocus flowers. We were even treated to some bumblebees enjoying the warm weather (if 7C could ever be considered truly warm!).
Missy was not allowed in the greenhouse, so we took turns popping in to be bowled over by the scents of the hyacinth and daffodils before enjoying the more traditional greenhouse offerings of cacti and ferns. The architecture and design of the greenhouses, and some of the benches, where as enjoyable to admire as the flowers were and we quickly filled a few hours bumbling about like the bees we had seen earlier. 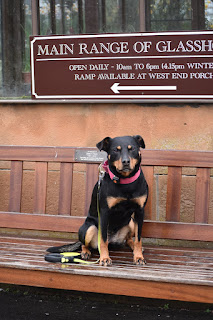 The only word of caution I have is the number of very fat, very bold and very slow squirrels about! I hadn't spotted any on the first lap round and, on the second, realised it was late enough in the day people were taking the small kids out to feed said portly squirrels. Thankfully my arm was not ripped out of its socket as I initially feared would happen when I realised we were surrounded by squirrels being fed by small giggling children (who would have had their days truly ruined should Missy have been allowed any length of lead). I managed to coerce Missy into a rodent free direction by physically holding onto her collar and turning whilst bodily blocking the squirrels from sight.
Thankfully Missy took my treacherous behaviour well and didn't make any kind of scene as she was escorted back to the much quieter herb gardens. The weather had started to turn so we decided to go and find somewhere to sit and have a catch up over some tea and cake. 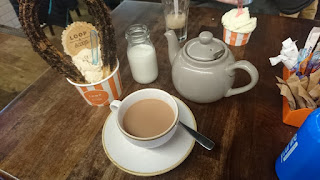 Not quite tea and cake, but Loop and Scoop proudly proclaimed on the building to be dog friendly and soon we were enjoying churros and ice cream with tea (a heaven sent combination, I can assure you!). Missy got the wafer off my ice cream and had a nap as my friend and I caught up on each others lives and made plans for trying to catch up again sooner. By then the rain was torrential so we all dashed to the car and headed home - not a bad wee day! 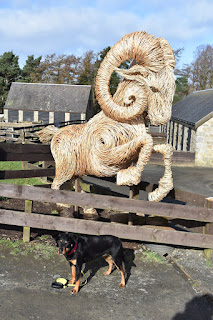 It was a double adventure weekend as the hubby and I managed to get out to Muiravonside Country Park.  Out near Falkirk/Linlithgow it was a short drive away and provided a new place to explore. First we did the sculpture trail and then we did the much longer green route which took us alongside the river and through the woodland. The sculpture and poetry trail had a few nice pieces to look at and was also a 'play trail' so there was loads of rocks and sunken in tyres and such for children to play and climb on before finishing up at the little play park. I was rather enamoured by the converted dovecot which now has bat boxes: 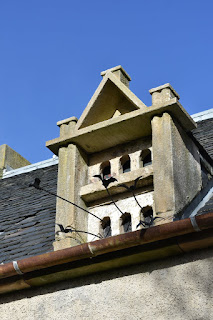 It was an odd weather day with a strong arctic wind but, when free of it, was warm and sunny, so we decided on the long walk to give Missy a chance to stretch her legs before we had a look about the small farm. There was sheep and cows and horses, so it ticked all the farmyard boxes! We've decided to suggest it as a picnic point for the Easter family get together, so hopefully we'll be back with plenty of cake in tow! If not with family, our friends with small kids will really enjoy the country park too, so a definite recommend! 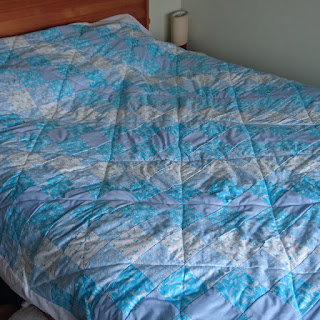 I have managed to polish off one of my larger projects - my new charm quilt for the bed. Ironically after my celebrating playing with Spring fabrics, this is most certainly a winter piece - but that's the peril of starting a project in the correct season, inevitably its finished as soon as its no longer appropriate. I'm starting my Easter sewing right now for that exact reason!