Camera Obscura and World of Illusion 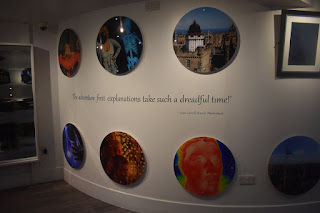 With it being Year of the Dog, I've noticed a few places advertising their dog friendly status online, including a few that I had absolutely no idea would welcome our furry friends. One of these places was the Camera Obscura and World of Illusions - a popular tourist attraction and just the kind of place that the hubby and I love. We used the excuse of Mothers Day to get a small gang of us together and made our way up the Royal Mile in the chilly rain.
Yep, we've gone from the Beast from the East to the Pest from the West - I don't know if these PR people should be shot or given medals, either way, it was dreary and chilly and an indoor activity was exactly the right kind of thing we were looking for. Whilst the hubby and I are used to just ignoring the weather despite how miserable it is in favour of the dog, my mother and brother are not so well hardened! 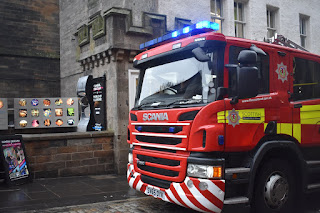 It was an eventful day from the start - after joining the queue outside the building and being supplied with wonderfully bright, and well branded, purple umbrellas (great marketing idea right there, and a well appreciated one as they kept the worst of the drizzle off) the fire alarm sounded. As a fire warden at work (I know, how sad) I appreciate a well executed evacuation, and the crowd control was remarkably well done. The fire crew arrived swiftly, it was a false alarm and they were off and we were back in the queue.
I like to always state "X number of adults and one well behaved dog" when going somewhere unconventional as I think it puts everyone on the right foot - I have a dog, yes, but I expect her to be behaved and calm, so lets not stress about it. And from the moment we entered the building the staff were absolutely brilliant. It was explained to us that we could come and go, if it was too busy for her it would be quieter later in the day, she was allowed everywhere and the only exception might be the show if there was someone afraid of dogs in the group (a fair enough exception in my opinion, forcing terrified kids to be next to dogs doesn't cure phobias, and it usually just stresses everyone out, including the dog). 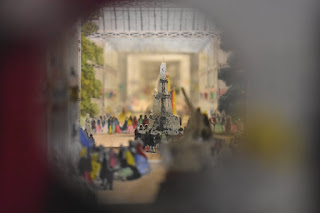 And then we were in. This is exactly the kind of place the hubby and I love - it's unconventional, it's unashamedly good fun and we both just adore the whole art of optical illusions. You start off with a bang doing the mirror maze and the 'bewilderworld', a large rotating drum of lights that disorientate and make you feel dizzy in all the best ways. Whilst I was in hysterics at my mother getting completely lost in the maze, the bewilderworld was not to Missys liking due to the grating on the walkway. She managed to get across but wouldn't pose, so unfortunately no pictures with the beautiful whirling lights! We did however get some fun photos on the illusions floor that she was very happy to pose for, so clearly she did enjoy the rest of the visit. 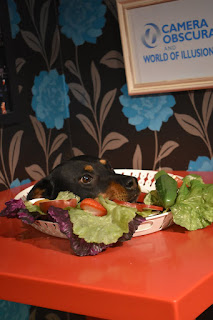 Missy, being the only dog in the building, was an instant celebrity and, as we skipped the next few floors to be sure we arrived for the show on time, we were stunned to be greeted by the waiting staff with a "Oh, is this the Missy we've heard about?" Clearly her reputation proceeds her! Again, the staff were great as they explained to us again that Missy might have to sit it out (no one objected at the sight of her, so clearly not a problem) and that if at any point we felt she was uncomfortable, we were just to ask and they'd let us out. It wasn't a problem at all, she did take a moment to settle as the hubby and I split up and she didn't know who she'd rather sit with, but once I sat with her she just curled up and enjoyed the down time. 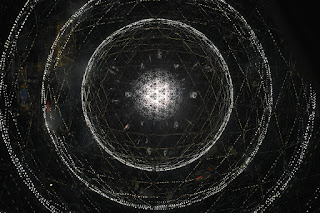 The show is the camera obscura itself, and it's like a periscope that uses ye olde technology to magically project the streets outside onto a round table. With the weather being so poor it wasn't the best I've seen it, but I would hardly consider it grounds to complain about the day (we were told that if we were unhappy we could request a free ticket for another day, but no one controls the weather so I felt that would have been absurd). Everyone still had fun 'picking up' the cars and people so it was still worth seeing.
After that we finished looking at all the other floors and went to the gift shop. Missy had outdone herself with her good behaviour and quickly endeared herself to the staff. It was quiet and they had fun looking for excuses to pet her and pointing out special pet candles to us (we picked one up, Missy seemed to like the citrus best as I let her sniff them all) and we explained how we had come to find out they welcomed dogs and that it wasn't actually stated on the website. 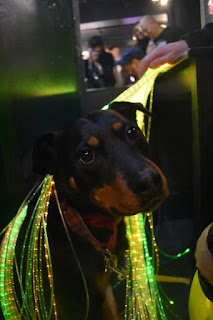 We all headed for a nice dinner at the Whistle Stop Barber Shop (I've eaten there previously and knew they welcomed dogs). My family always find it a novelty being out with Missy and just the amount of attention she gains by sitting nice and quietly. We all agreed to take advantage of the pop-in-and-out ability with the Camera Obscura, its its very generous late night opening, and headed back again - I was really pleased about this as my brother wasn't originally keen on the idea of the Obscura, so he had clearly been won over. 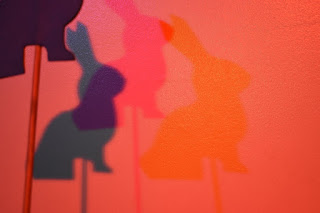 All of us were surprised that it was still relatively busy. It didn't stop us all having fun, and all four of us spotted something new we hadn't seen the first time round, which in my opinion definitely makes it worthwhile. It was also nice to each point out our favourite bits to one another as we passed, and I was pleased that we all liked and enjoyed different things. As we left (via the gift shop again, my mum wanting to get a postcard) we were remembered by the staff and were assured that they were going to definitely update the website. Missy got some photos taken which will hopefully go up on the Facebook page, which, to me, makes her famous!

With the rest of the family now saying they'll have to go and visit, I can see Missy and myself going back in the future, and I'm really pleased to say that my mum had a wonderful day - which was really the whole point! 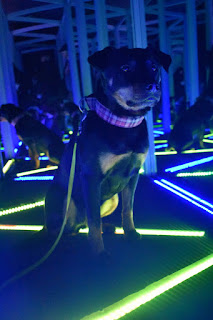