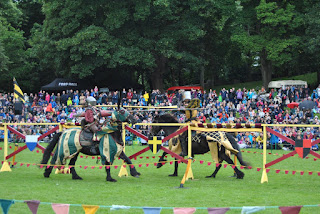 This weekend was annual jousting at Linlithgow Palace and, for the first time since I knew it existed, its landed on a weekend I'm not rota'd to work - so there was absolutely no way I wasn't going. 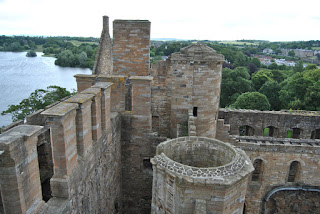 We started the day early and had a wander about the castle before it got too busy (and it did get very busy!) so that we could legitimately tick it off the castle to-do list. Missy has well and truly conquered the spiral staircase although we accidentally wrapped a few people up in her lead winding up and down! Everyone was in good humour though and she was quickly the centre of attention and got lots of pats and cuddles. 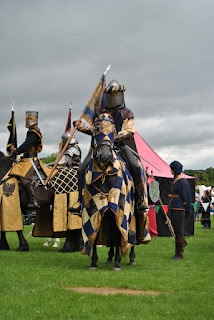 The event itself was much more than I expected. The historical reenactment societies were out and there was a host of medieval games to play, armour to try on and gruesome stories of torture and battle to revolt and enthral all the kids. Between the two jousting shows, the jester show, the dragon puppet and the games, we actually ran out of time to look at all the things on offer.

The jousts were cleverly done - we had our villain (Sir Checkmate) and our Knight-of-the-Flowers-knock-off good guy and they did tremendously well with their banter and theatrics. The horsemanship was impressive as they managed to not wound each other whilst keeping in character and shoeing off the various skills expected of a knight (I think we were all relived when the heads they were to cut in half turned out to be of the lettuce sort!) 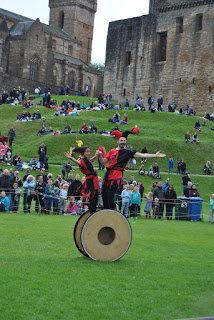 The last standout moments were the jesters and the 'dragon training'. The jesters stood out because they were absolutely brilliant fun to watch with perfect comedic timing. They had the whole crowd laughing and cheering from the word go. The dragon training was actually a giant puppet. There was a puppeteer in the head and then all along the cloth body were holes with hoods on them for kids to go in. The day out was a whole family one so I had my niece and nephew with me and, as they were asking for volunteers, I was being silly and jumping and waving going 'me, me!' trying to encourage them to show some interest in participating and I got chosen! I was put to the head of the group and I think the idea was that the kids behind me could follow my lead/I could be trusted not to run into the puppeteer. Either way, it was tremendous fun running about in circles roaring and jingling the bells that were sewn into the body. I don't think I'm going to be allowed to live it down anytime soon, but that really doesn't bother me - all this being grown up malarkey is just boring!
Although the hubby has decided that I'm not allowed to be left unattended again at these things! He'd literally nipped off to the privy to find me parading about as a dragon, so I can hardly blame him for saying so! 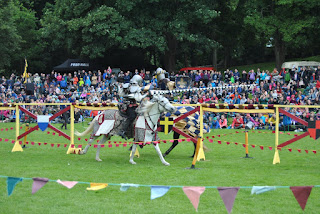