Well, that was a quick weekend! It was a flitting visit down south my sisters to see my niece celebrate her 5th birthday. She had very nicely asked if her uncle could come and do magic for her party and, being absolutely wrapped around her cute little pinkie, we were more than happy to oblige her!

It was a cat themed party so, on a quest to fit as much about cats into the 30 minute routine as we could, we had a special kitten spell:
Paws! Whiskers! Tip of nose!
That's how kitten magic goes!
When chanted by more than 30 children, it was quite spectacular! And then there was a magic trick involving milk and magic appearing chocolate mice. All the kids and the helper grown ups had on cat ears and tails - I'd even managed to find the time to make myself a magic waistcoat to match hubby's coat and hat. 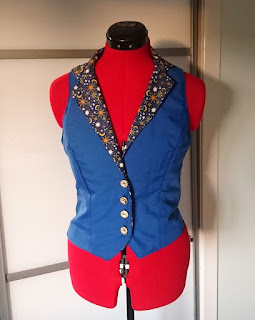 The highlight of the show though for me was the hand chopper (a portable guillotine for putting hands in rather than heads). After cries of delight at being asked to see a scary trick, the children were eager to see the hubby put his hand in. He chopped in two his (chocolate) finger with a truly spectacular snap and suddenly all those delighted faces turned to horror as a brave mum or dad was requested. It was a half beat too long before one child bravely volunteered his mother! The trick went perfectly afterwards and, barring the chocolate finger, no one was harmed!

My niece had a great time. Alongside the magic show there was colouring, pin the tail on the cat, kitten hoopla and even a beanbag toss whereby you had to feed the cat little knitted mice and fish. A great party and all the children (and parents) seemed to have a great time. My sister has posted all the awesome stuff to see here.

Missy wasn't left out. After a few hours in doggy daycare she was spoiled with doggy sushi and was even given a gift by my sister for putting up with all the craziness - so low and behold, the cowardly not-a-lion! 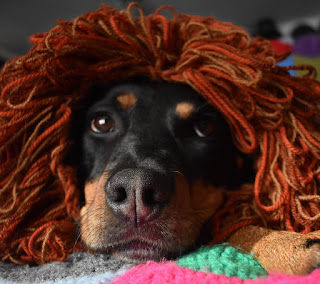 I really need to make a scarecrow and tin man outfit for my niece and nephew now! I wonder if I can talk my other niece into being Dorothy!

A very quick but awesome weekend!
Posted by Rachel at 12:17