Well, it's been a busy weekend! The hubby and his friend were going to a wrestling show in Manchester on the Sunday, so politely asked to gatecrash at my sisters, at which point I decided to gatecrash the weekend too and get a chance to hang out with family. We had planned a doggy beer festival and the Dogs Trust Doggy Fun Day down in Manchester whilst visiting my sister, but the weather has worked against us! I think we all love the notion of an endless Indian Summer, but the reality is that at 30C all day every day, life in our temperate little county ceases. 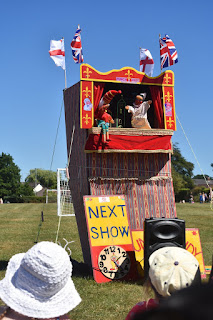 We arrived Saturday morning and were told that the beer festival was quite far away and it wouldn't be fair to put dogs and small children into the car for so long, which we all agreed was a sensible thought (especially after driving so long anyway!) so we did the local festival (or gala day as we call them back home). It was a good shout, the weather had hit high 20s so we stuck to the shade and mooched about the stalls taking our time.  I paid for my niece to play in the bouncy castle and my sister bought a crepe for me and we enjoyed them together watching her play whilst the hubby and brother-in-law had burgers. Missy was more interested in the burger, as was my nephew who is a true one year old carnivore.
The highlight of the festival was a Punch and Judy show. I haven't seen one since I was a kid and had thought the PC brigade had banned them completely (killjoys) so was more excited about it than the kids. It wasn't PC in the slightest, although Judy hit Punch more than he hit her and the puppeteer, realising we were totally game, basically trolled the hubby all the way through the show, calling him out, getting him to say hello to all the characters and even sing with the crocodile - he took it in his stride (the hubby, not the crocodile) and we had a great laugh.

Sunday we had the sensible, but unfortunate news that the dog fun day had been cancelled - with at least 29C forecast, it was deemed unsafe for the dogs and was going to be rescheduled. Whilst we agreed it was for the better to cancel, and appreciated that the welfare of the dogs came first, we had hammed up the idea of a day with lots of dogs and that we'd enter Missy into the waggiest tail competition to my niece and, no matter how sensible the logic, when you are four, if you've been promised a waggiest tail competition no reason is good enough for it to get cancelled. A hunt on Google using all the different key words we could think of didn't throw up anything indoors that Missy could come along to, and eventually I found a beach themed dog cafe called Central Bark - the day was saved! 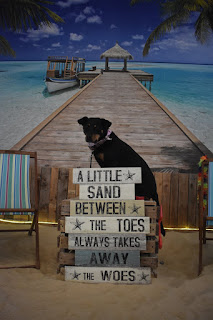 It was basically a doggy day care/dog friendly cafe rolled into one and had a lengthy list of milkshakes and a varied menu that catered to everyone in the group. We skipped on the doggy day care and enjoyed the indoors beach theme and met lots of other dogs. The BIL has the very common phobia of dogs after being nipped as a child by a German Shepherd, so it was good to see him actually enjoying the canine company and that the phobia wasn't going to be passed on as both niece and nephew patted and hugged the dogs and gave them all popcorn. So the niece got the doggy day she wanted and my sister got to top up on doggy cuddles!
We then went onto the local park and let the kids play for a bit before getting back to the house before the heat of the day struck. It was ice creams and a dip in the paddling pool after that, rounding off a very good day (although Missy skipped the paddling pool and alternated between sunbathing and chilling out indoors on the sofa). With it being so hot, what we all needed was a more chilled out day, so it was absolutely perfect. My hubby and his friend went to the wresting and I played board games with my sister and BIL - we beat Pandemic and just had a really nice time hanging out together.

My sister had work today and the kids had nursery, so it was a quick morning and lots of cheerios and goodbyes before waiting for the traffic to pass and catching up with the BIL. We went back to Central Bark this morning for breakfast before going on the road again and opted for an hours 'soft play' for Missy so that the grownups could catch up. The location is convienent enough that, on our next visit down, we'll probably use the full day doggy day care so that we can do a non-doggy day - an option that's very useful as trying to get something to suit a young family and a dog can be difficult!
Although, with the BIL deeming a pug we nicknamed 'Haggis' as his spirit animal, I suspect they will be back before us!

A really good weekend, even though it completely failed to go to plan!
Posted by Rachel at 09:45