All seasons for the Otter Party

Well, it is Scotland.


I think we can all conjure to mind at least some version of that classical postcard that shows that as a country, its always raining, or snowing, and that all four seasons in one day is not uncommon. Well, this week started with the promise of spring: 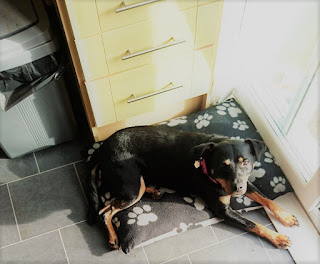 The snow drops are out and the crocus flowers are coming up in swarms. That promises good weather, right? 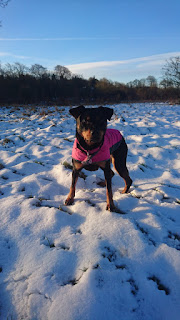 Forget Winter is Coming, it just wont go away!

These photos were legitimately taken 2 days apart. Whilst unwelcome to myself, the snow proved to be a great hit with my 3 year old niece who, living on the opposite side of the border, very rarely gets anything that amounts to actual legitimate snow. Whilst she had fun, I think she was rather surprised at the fact that we have many kinds of snow, including, unfortunately, the horrid, driving, soggy stuff that met us on our first outing out! Our second outing was more successful, as it had frozen a bit and wasn't driving down as hard.

With a baby on the way, this visit is the last one we're expecting from my sister before she pops in June time. To make a fuss and celebrate for the sake of having a nice time, I organised an "Otter Cuddle Party" - the idea of course belongs to my niece (I got her the Finding Dory pyjamas with the cuddling otters and a cuddly otter toy for Christmas, which she has now decided is the best thing ever). I don't think my sister expected me to actually go ahead and have one, but we did and it went down brilliantly.

To start the day we got all the cousins together (meaning a 3, 7 and 12 years old respectively) and took them swimming at the local pool which is really a glorified water park. Otters like swimming, right? And I wanted to get those kids tired out!
Next we had an otter magic show which my hubby had organised - as the wizard of the clan, we felt he should do something fun and silly and we picked a trick specifically for each child. The classic egg bag was for the 12 year old, we had some magic appearing (and replicating!) pikachus for the 7 year old and finally the 3 year old got to help make an otter magically appear in the special box (after some difficulties with a floppy wand)!
By which point it was time to eat. I had previously asked my youngest niece what kind of cakes otters like, to which she replied kelp cakes, like the ones in Octonauts.
My sister sent me this as reference:

And I pulled off: 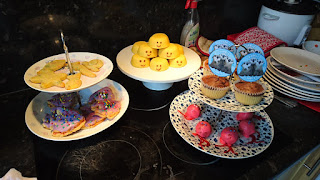 I will admit to a certain smugness about those otter cakes. The squids were slightly more splats, but you cant win everything. And all the biscuits were rolled, cut and decorated by my niece, and she was very pleased with them.
After the food it was time for everyone to leave and go on and do other things. There was lots of washing up to do, but it was worth it!